Arrived there to find I was the sole representative of my little running club (Woodstock). Thankfully had a friend, David, along and we agreed to go it together until natural selection came into play (had even money on me being first)! Was a lovely day for a long run....bright conditions, lovely soft, cool and friendly people all around: racers, marshals, legions of fans, nanny goat and sheep.


We took off at a conservative pace and watched the contenders gallop off into the distance. Lovely downhill start with only a few small hills in the first quarter made for a pretty quick 10k split of around 45 minutes. About here we started to pull in a few others going up the big bitumen hill next to the paddock where the bull was busy servicing his mass of cows. Felt good and stuck to the same pace and went through half way in 97 min. We were still chatting together comfortably so we picked up the pace a bit and at least one of us still believed we could go sub 3. 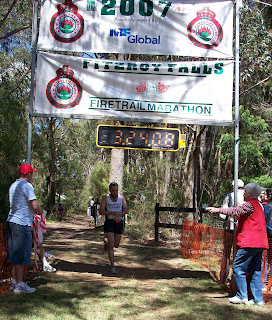 Then came to a section of big downhills and I thought to myself 'hope we don't have to run back up here', just as Fats and the others started to pass the other way, hello an out and back. Struggled up a few of the steepish ascents on this bit and came to the 'one too many hills' and said to David time for a power walk or something like that. Walked for about 20 metres then found the turnaround point, had a drink and tried to catch back up to David.

Managed to hold on to the sight of him for maybe the next 2kms before i had quite a long break at the aid station at the 30km mark. Had a laugh with the firemen and women and continued on. Knew the rest would be a lonelier time. From about 30km onwards the entire course just seemed to go up and up ever so gradually. One consolation was the trails were well graded from here on made footing much smoother. Tried hard to power through 35-40 but the slight never ending accent and then the 39km torment slowed me to a power walk once again. Did pass 2 people on the back half, the 'Claytons' leading woman, and one fella who was leaving a technicoloured souvenir on the side of the course. Hope you're ok mate.

The last 2kms were again uphill and I powered on hoping to catch a few people running on empty. Had a laugh with the lovely woman with her lovely children at the bottom of the last hill. Didn't see another runner until the last corner and I could see the finish line. One fella was about 100m in front of me and another who had the same idea as me 100m behind. Was happy where I was in the middle so just jogged it home in 3:24 and a bit. So a longer 2nd half but given the uphill nature was happy with that. Lovely cheer as I came through the finish too, thanks everybody.

Well done to all participants. It certainly isn't a deadly hard course and to be honest all the hills are runnable and not at all extreme. I say pen this one into your calendar for next year. I will be.
Posted by Brendan Davies at 1:25 PM