Victory tastes sweeter the second time around. My squash team won our pennant final tonight for the second competition in a row against Brairs.


It was not, however, all plain sailing. Unlike our last grand final night where we convincingly crushed the opposition, tonight's games had all the twists and turns of a game of snakes and ladders. Unfortunately, it was an injury to an opposition player that ultimately proved to be the turning point of the night.


Up first, was my good training buddy and friend Jean-Luc, who has hit a nice vein of form lately. He got away with a 3-0 victory which was just the start to the night that we were all looking for. Next up was Joe. This was a big game. If he won, it would have been a huge blow to the opposition, to go down in the first two rubbers is usually too high a psychological mountain to overcome. Joe just didn't have his A game on tonight and went down 1-3 to his opponent. Although it was a rubber defeat, we all took the positive out of the one game he did win. This can often be the difference between winning and losing a night. 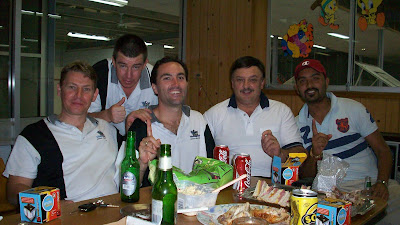 It wasn't surprising that they called the number 4's on next. It was a rubber that they would have counted on winning and prior games between our number 4, Johnny, and their number 4 pointed towards that prediction coming true. Unfortunately this would have been the case, except for the injury devil to hit hard at the most untimely moment - on match point to them! Yes, leading 2-0 and 14 to something in the 3rd game, their number 4 went down with a very sever achilles injury and had to forfeit the game. It was a stroke of cruel bad luck and nobody would ever wish that to happen to anyone at such a time. It was a rubber we should not have won, but these things happen in squash.

This was a huge blow to Briars. Winning that 3-0 would have put them in a strong position. I would have had to have won 3-0 to ensure a victory. 3-1 then it would have gone to points. Any other result in my game and it would have been Wenty Leagues as runners up, not Briars. With that cruel kick in the guts, their number one had all the pressure on him instead. To his credit, he did come out with victory as his aim. Regrettably for him, he came out 'all guns blazing' and made quite a few unforced errors in the first two games. He was trying to kill points too quickly instead of feeling himself into the game by rallying. He was playing into my hands playing like this. In the third game, and with it all to play for he pulled out some magic winners and I began to make more and more errors which resulted in a game to him. I was still up 2-1 so no need to panic just yet.


He used up a lot of petrol in that game and this was evident in the last game which I won convincingly and sealed the night for the team. It's not a nice way to win when an opponent has badly injured themselves. I just hope he recovers quickly. For the record, had that injury not occurred it would have gone to points and it would have been really, really tight.


For our victory, we received a little glass photo frame that we will put picture posted here in. Onwards and upwards to three in a row next year!
Posted by Brendan Davies at 9:03 PM