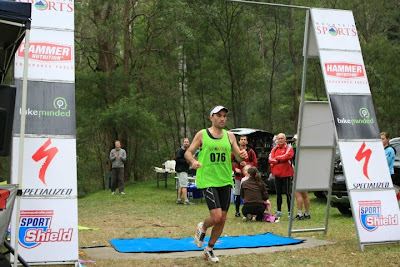 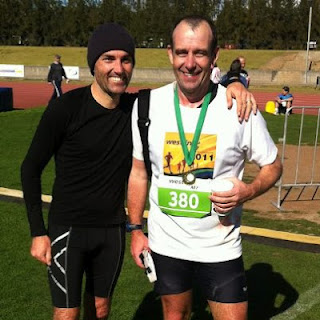 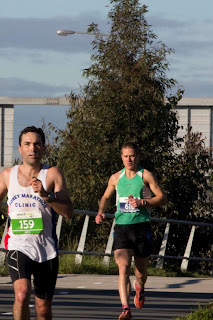 The M7 Marathon today (photos above) has brought an end to a huge month of racing. With the two weeks off work with school holidays, training and racing was amped up. It started early in the month with a surprise 3rd Place at the Striders 10k at Olympic Park. The time wasn't overly quick, 34:36, so the podium spot was very surprising. This series always attracts a high caliber field but for some reason all the guns stayed away.

It's purpose was to sharpen me up for the Kokoda Challenge, a tough 4 man team event on the Gold Coast that No Roads entered a team into. Last year I joined Mick Donges, Andy Lee and Clarke McClymont to smash the 96km course record. This year, with Mick's European sabbatical (and boy isn't he haven't fun!), a very able replacement was found in Ewan Horsburgh (winner of Coast to Kosci and Coburg 24h). The course was considerably tougher this year, with the course either ascending or descending all the way through. Added into the mix was wet weather which made the track very heavy and slippery (not that this was a problem for the inov-8 X Talons!) The event isn't much of a race as it is a fundraising event (think Trailwalker type event), but that didn't stop us giving it a red hot go. In the end we finished in 11h 43m, some 90 minutes slower than last year's time but very happy to again record our second win. It's a brutal course and I hope that some of my Queensland ultra mates can get a team together next year to challenge us (if we do it again!).

Next up was the Nepean Odyssey, an event held in the backyard at Glenbrook. This is a multisport event (MTB, Kayak, Trail Run). I was a late call up into Jeff Price's team. Originally he was going to enter individually but succumbed to a knee injury. Thankfully, he was able to transfer his entry to make a relay team. So I joined Jeff, the human outboard on Kayak, Rod 'Cadel' Forrest on MTB. The 19km run leg was last away and was keen to bust out a smart time on some of my local trails. After Jeff had finished his paddle, we were in 6th or 7th behind (not sure of the individual/relay/2-3 man team breakdown), but fair to say I was keen to show these multisporters a clean set of heels! Good mate Beth Cardelli was also making up the third cog of a relay team and had left about 8 minutes or so before me. I was keen to catch her if I could and then be the first relay team home.

Unfortunately in my haste and lactic state about 3km into the run leg I missed an obvious turn down a single track (surprise surprise!) and found myself in no mans land and that dreaded lost feeling felt all too often! Not wanting to let down the team, I turned back and chased my bum off down the trails. I probably lost around 6 or so minutes on my detour, but it was fun rechasing all the guys I had already caught. In the end, Beth was way too quick and we finished 3rd over the line behind the individual male winner and Beth's mixed team. All was good and I wasn't burnt at the stake, as we won our all male relay category and picked up a big bag of goodies that we shared. I grabbed the 6 pack!

I wasn't expecting to set the world on fire at today's M7 marathon, as it really is the start of my sub 2:30 or bust marathon goal. I just wanted to lay down a solid time and I thought if I broke 2:40 it would put me up there. I didn't do myself any favours though by taking off a bit too quickly and really putting myself in oxygen debt way too early in the race. Two years ago I ran 2:37 on the same course by running pretty smartly. This included going through the 10k mark a minute slower than this year and saving a bit to nail the big hills before finishing strong on the flatter and more downhill second half. This year, I didn't respect the course enough and the fast start hurt me before the hills killed me and finished off any chance of running fast splits on the back half. I struggled through in 2:43 but I will take the positives out of today knowing that I can only improve with more specific marathon training which is planned and being more tactical about racing!

Still the bright side was it was a gorgeous morning for running and it didn't cost me too much, the top 3 men all ran sub 2:30 or just over, so I was way off a podium place. Well done to Sydney Striders Ray Wareham who paced his run beautifully to pass me at 37k and finish strong for 6th and John Binfield to finish 5th. 4th went to another good mate Chadi Elashkar who ran a great race and probably deserved to be in the money which regrettably is going back to Victoria with the top 3 men; winner Mark Tucker and the 2 other podium getters. I finished in 7th, and jagged a M30-39 3rd place medal! Congratulations go to fellow No Roads team mate Angela Bateup who finished 3rd overall in a very close female finish. No doubt the prize money will come in handy for her upcoming World Long Course Mountain Running Champs assault on Jungfrau.

Posted by Brendan Davies at 7:59 PM