As races go there were no riveting tussles up the pointy end, pretty much half way up mini mini was the last time I saw a competitor apart from the very supportive and encouraging early wavers.

I got a quick start down to Nellies, watching Matt Robbie leaping the water bars like a mad gazelle, he took off after leader Andy Lee who seemed to have one thing on his mind-getting to the front and staying there! It was us three who led the field down Nellies and to Megalong Rd. Andy was stretching the gap and Matt was chasing him. It was an effort I wasn't willing to copy that early in the race so eased back into my race plan. Soon after Matt's effort caught up with him and he let me go just before Pinnacle Hill. I felt strong climbing which was a good sign but also in the back of my mind wishing Andy would stay within sight, but there was no chance of that happening entering the single trail.

I was joined by David Venour from Melbourne Milers Club along the single trail and we crossed Cox's together and began the climb. I think this is where knowing the course worked in my favour as I've found out from previous experience you have to really pace your climb in this section or the Black Range will destroy you! Climbing up here I said to David I expect the real mountain goats like Alex to pass us in the next 5 minutes. I was surprised to get to the top and still be in second spot. Looking at the splits my Pluvio time was 1:30 slower than last year, but I think I can put this down to the extra heat and humidity on the day. The splits also tell that Alex put in a mighty climb and had erased the lead I had to only 45s. We definitely have different strengths on the trails mate!

From there my race plan was to power along the black range without overdoing it; I was happy how this section went. I was receiving some feedback from early wavers and spectators on my time deficit behind Andy. The further I went the smaller the deficit was becoming so I knew I was gaining, but as is the beauty of trail running it can be rather soul destroying to put in massive efforts and still not catch sight of the runner in front, especially on large open sections. I tried not to let this impact on my mental state. I had a job to do and was definitely still thinking about victory at this stage.

Getting to Deviation a spectator told me Andy was 2 minutes ahead. I knew that could easily be overcome in the last section with the big descents. I finally managed to run up for the first time the big steep stingers just before the road, that told me I was in good shape to put in one last dig. I started the single track after the road very quickly as was the plan but this also was my undoing to some extent as I slipped on one of the little wooden plank bridges - it wouldn't be a 6 Foot for me without a fall, I'm just glad nothing too serious resulted. I picked myself up and dusted myself off and charged off again. The effort was working, someone told me the gap was 90sec, but with the effort also comes the expense and now I was finding the going really tough up some little rises and cramping a bit in the calves. I didn't see Andy at a large open space just before the downhill starts and I knew then that my goal now was to finish in second. I didn't know how far behind anyone was but results show that Rob Walter, Scott and Tucks had also been pushing along very nicely and had gained on me.

The descent was a bit uneventful, no falls unlike last year, but got to high five Sleep Train, a great sport and shows what great spirited people there are in the running community. You are still the king of this race mate and I hope you get better soon. At the cow bell I could start to hear the crowd warm up for Andy as he approached. De ja vu...this also happened to me at Pikes Peak last year, except unlike then I wasn't still 2 miles behind Andy down the side of the mountain! Coming in to the finish was very emotional; I have dreamed of winning this event (who hasn't eh?) and to podium was just as good; especially to Andy who has been a 6 foot stalwart and multiple podium getter but never the top spot. 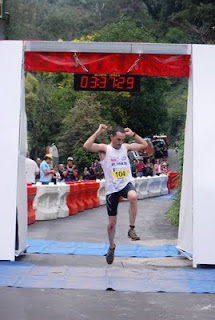 All the way along the path section I could hear Buzz and I think my mum yelling, it was just really really cool. Got to high five RD Colin and Buzz in the home straight and many others after the race. I think those that were there saw how happy I was as I crossed the line. Time was 2 minutes slower than last year but I didn't care less, I just finished second in my favourite race!

As always, much appreciation to Colin, his team of organisers and vollies and SS for giving us all this wonderful opportunity to participate in something we love doing. Special mention to John M, your speech was very special mate and brought home how insignificant our struggles on the trails should be.

I'll hopefully be able to come back next year and attempt to go one better. Moving up to the mountains this year should help my cause considerably in this area. Thankfully there are no shortage of quality trail runners up there to train with!
Posted by Brendan Davies at 1:07 PM