I'm confined to sitting on the couch and nursing a very sore right hamstring following an awesome day at the 6 Foot Track Marathon. Boy I had fun yesterday!


I started in Wave 2. On advice from some seasoned 6 footers I got to the front right from the start and sprinted down to the start of the narrow descent of Nellies Glen. There were one or two other second wavers in front and were hopping down the stairs like mountain goats and I felt that this was the way to go so latched on to them. Probably could not have pushed it any harder down there. I was jumping two and three stairs at a time, and paying caution to the wind. Started collecting the back markers from wave one half way down and they were very considerate, moving aside at appropriate times to let us pass. The fella in front of me was very good at asking them to move…think his mate was calling him 'Whippet'. So whippet thanks for not only getting me down quickly but for showing me how to ask people to step aside! Then got stuck in to the run earnestly at the undulating kilometres before Cox's river. Was really pushing the pace and remember seeing the 10km marker and looking on my watch and it said 44 something. Got held up by a small conga line for about 10 minutes in the thick overgrown singletrack section coming into Cox's River but looking back that was probably a good thing as it forced me to slow down and think about the climbs ahead instead of going as fast as I could now. Only thing I didn't like about being caught behind other runners was that it doesn't give you a lot of time to scan the ground for rocks etc and in this section rolled the same ankle twice but managed to run out the pain both times. Was encouraged by a first waver who told me I was on pace for sub 4 but this meant little to me. It was my first 6 foot and I was just enjoying the moment! Got to Coxes River in 1:11:26 - 20th quickest according to the results.


Leading into the race I had read on the coolrunning forums that if you go too quick early you pay for it later. I was definitely going to test the theory! Started up mini mini jogging but realised that I could probably power walk as fast and save some juice in the meantime. So employed a 'powerwalk then surge' policy, 25 metres walk, 50m run and that seemed to work well. Knew it was the way to go when I was continuing to pull in first wavers using this method. In the saddle section I really put the hammer down again and got into a good rhythm before reaching the next big climb up to the Pluviometer. Again employed the same uphill method but the power walking wasn't quite as powerful and the running surges were becoming shorter and shorter in length but somehow I got to the top in 2:21:54 - according to spreadsheet had dropped 5 spots to 25th. Along Black Range Rd I really struggled to keep up the leg speed but persevered at a slow pace. I remember being passed by a couple of second wavers who were obviously treating this section like the business end, while I was desperately trying to hang on. I was spurred on and thankfully the form and leg speed did return and I was running the smaller hills again nicely. I kept a few runners in my sight and actually started to pull in a few more first wavers and early wavers. The little deviation of a hill before Caves Rd (probably the steepest on the course) made me think of digging a hole to die in but I soldiered on. Crossed Caves Rd and tried to open up but was really struggling. I remember walking at some points up hills that weren't really even hills so lost some time here. Was passed by my running mate Bear whom I had passed all the way back going up Pluvi. Thanks for your words of encouragement mate–they spurred me on just when I needed it. He told me that it was all downhill from here, so that was a real boost. 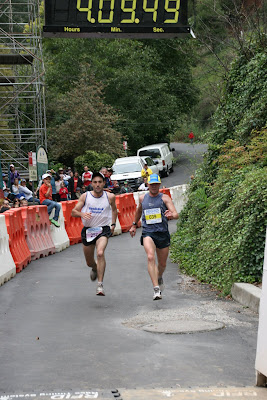 As I started the descent into Jenolan I was struck by the worst stitch imaginable so was really constricted in how fast I could run. 500m into the drop the stitch did start to disappear so I really put the foot down. I could have easily done some major damage like an ankle or knee here, I was just trying to get to the bottom now ASAP and didn't care about anything else. Along the handrail section I was literally sprinting and even managed to catch a first waver right on the finish line (see photo). Finish time was 4:04:47 and 28th position. After a shower, massage and some food, I watched some competitors come in and this was the icing on what was a brilliant day. To see some of the expressions, the images of joy, determination and encouragement reminded me why I love this sport. I saw people finish arm in arm, others limping in cramping up, others fist thumping, some being hugged by spouses and kids…yeah that stuff is priceless. Listening to the announcer, it sounded as if everyone got a PB or achieved their goals for the day and boy she knew a lot about the competitors! I have never felt the camaraderie or encouragement in any other sport before. If you finished 1st, 101st or dead last, everyone that finished was treated like a champion. This is one tough race and if you finish you have achieved something that you will hang onto for the rest of your life.


The track was awesome, the weather could not have been any better and the aid stations resembled smorgasbords. I loved every second of it and am looking forward to next year already. This would have to be one of the best races going around! If you ever get the chance 'just do it'!
Posted by Brendan Davies at 11:15 AM