I started my 2010 6 foot campaign last November with the Deep Space Mountain marathon and knew that after that race I had a lot of work today to achieve the goal what I have set out, but unsuccessfully done at previous attempts; finish the 6 foot under 4 hours. It was after that run that I set my mind to the task ahead and planned a training regime that would get me there.

After that race, I knew that more specific, targeted training was needed to succeed on 1) trails and 2) big climbs. Up until then, I've always trained on the road and when taking this into mountain runs I have been found wanting. So over December and January a concerted effort was made to complement my usual mix of road runs and interval sessions with more hill sessions and long runs, preferably on trails. Fortunately 6 foot is at a very convenient time of the year for me to have no excuses; teachers after all are not needed over most of December and January (some may argue at all!) so I upped the training and for the first time ever was consistently doing double sessions daily and hitting mileage that averaged around 120km a week.

The fatass events were very convenient and provided great company and competition and motivator get out. The oz day fatathon was the one where I felt in control over the 30km mark and the mega mega gave me a truck load of confidence knowing that I could run all of mini and mini and pluvio and still feel good at the end. Throughout this training my body was getting stronger, I was leaner than I've ever been and the mental demons were disappearing. I knew that this could be the year I finally tamed the beast instead of it breaking me.

After mega mega however, the amount of hills and more specifically downhill running I had been doing (trying to toughen the legs up so the pounding on race day would not leave my legs a shot mess on the Black Range) finally took a toll and I developed an injury to my knee that left me in quite a deal of pain if I attempted to run quickly or over a mid range distance. The only thing to do was to rest so I had about 3 weeks off any intense running. Thankfully, as I am going back to uni this year, I now cycle about 26km a day (on a MTB) which maintained my fitness and proved a good tonic for my battered joints. The litmus test came with the SMC 25km where I resolved to race hard and, if pain hit or slowed me down, cancel my 6 foot entry. Thankfully I got through that fine and it was clear the worst of the injury was over.

With that giving me back my focus to the race, I decided that the remaining time pre race would be spent sharpening up my speed and tapering. I would just have to have faith in my endurance and strength to go 45km hard all the way. The Striders equaliser a couple of weeks ago gave me a great boost, finishing only a minute or so behind Fats and also gave me an opportunity to test my knee on rocky descents. I also 'trail tested' the shoes I was to wear too...Innov8 x talon 212s. The NSW Masters games was the last event pre race and feedback was great, a 'track' 5000m PB. I was ready to go!

Come race week, some very light runs and a good rest, with plenty of carbo loading. Very organised for once! Not so race morning! Remembered I had left my inner soles in the car while standing in the bus queue, then remembered I left my Garmin in the car while on the bus; a mad scramble through the baggage truck to retrieve my car key in order to get in the car, and I was worried I wasn't going to make the start! Thanks to RD Colin, got to the start to warm up and mentally prepare for the battle ahead. I had 3:50 splits written on my arm and was determined that this would be a 'credit' mark today with 3:50-4 being a pass mark.

Once the gun went I was off. I always think a quick start is crucial to get to the stairs without being held up and skipped down the steps in a good position. Once down the bottom, found myself running with Fats with only Andrew Lee out in front. Ran probably with the right intensity all the way to Megalong Rd and was passed shortly after by Tucks and then Uncle and then Cambell Maffett who I was sure would pay the price for wearing light road shoes (obviously wrong assumption)! From here, we held these positions in the single track to Coxes. Fats was showing how it was done by cruising in the last couple of k's before the crossing 'to give myself a breather before the hills', so I followed suit.

After the river swim Sam Walker passed and he looked very strong and thought that this boy could take it out, until Alex Matthews passed going up mini mini and it was obvious that he was the one to catch. He breezed past like he was out for a training jog. Meanwhile Fats and I were having our own KOM battle. Fats slowly inched away and consolidated on the little flat section half way up mini while my legs seemed to be stuck in uphill mode still! To my surprise I could see Andrew Tuckey getting closer, and I knew he must be suffering a bit for his quick start. After passing Tucks it was solo running for what seemed forever, only occasionally passing the odd early waver who all gave great encouragement and motivation.

Half way along the Black Range my Garmin died (a result of accidentally leaving it on the night before) so I had no idea how I was going, but just by the fact that I wasn't being passed by anyone as had happened in abundance in previous years, told me I was at the very least, holding my pace and position. I really was giving it pretty much max effort along the range, and once to the Deviation knew that I had run that section far better than ever before. That HILL, we all know the one, before Caves Rd was the only time I walked, and the short respite of about 20 seconds lowered the heart rate sufficiently in order to give the last section a big big effort. I wasn't going to leave anything on the track. 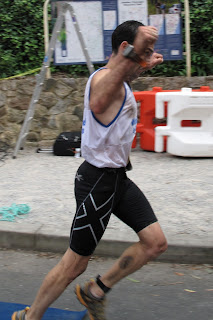 Nearing the cabins, I finally caught sight of a runner ahead, Sam Walker but thought he was running too well for me to gain any ground. When we hit the last downhill, surprisingly he was taking it very gingerly; and I love this section so just threw caution to the wind and gunned it. The X Talons were giving me sure footing and confidence and I was literally sprinting. Unfortunately while the shoes were more than great, the legs proved too fatigued to lift high enough over a rock and down I went, in the rubble. It was quite a shock, it happened so fast. But being so high on adrenaline I wasn't hanging around to view the damage; I was getting down the bottom broken leg or not (thankfully it was just a couple of grazes!)


When I turned the last corner, it was the first time I had seen a clock since the river crossing and I really couldn't believe the time. Post race, I quickly got my self showered and patched up and went and joined in the festivities for the rest of the day. I was, and still am, on a real high and even though it is only one race, it is a special race for me and to finally get one over the track is so satisfying!

Sitting back and watching everyone finish the race, is always a wonderful moment. I love how people from all walks are able to get together and share a common love. All thanks to Colin (my hug summed it up!), Kevin, the Striders and Firies vollies for putting on this terrific event. I'll be back next year...hopefully with a way to slice 5 minutes off my KOM time too!

Posted by Brendan Davies at 1:03 PM