After the aborted Bogong to Hotham last weekend, I was really keen to knock out a solid run on one of my local courses. I know this course reasonably well, being part of the The North Face 100 and I was hoping for a clear night to test out my head torch, the Ferei HL08 Li-ion LED Headlamp (rechargeable) generously given to me by a great Aussie company Liteshop to trial for this twilight/night race.

So with Wayne Bulloch and the McClymonts, we headed to the Narrowneck Plateau, and it was clear on the drive up to Katoomba that, like the Bogong to Hotham the week before, we would again be challenged by difficult weather conditions, this time it was in the form of super heavy mist. Unfortunately this also meant the magnificent views offered by this run would be nothing but pea soup. But hey, this is what trail running is all about.

On the way out to the turnaround at the end of Narrowneck good mate and No Roads teammate Sleep Train was right on my tail the whole way, and despite attempts to break the leash, he always managed to pull me back to him. Seems he is gearing up his training for the big races ahead.  He has trimmed down and is looking fit again. Look out everyone!

By the 10k mark, I was feeling super fatigued, not aerobically, more just in the legs, and I knew it was his race to win if he had it in him and boy did he ever, shooting off up one of the steeper rises heading back up the trail. I just couldn't find the extra gear to go with him tonight.

From then on, the dwindling light totally disappeared and it became very dark very quickly. Unfortunately, the heavy mist negated the super strong beam from the Ferei, and it was hard to see 2 metres ahead through the water vapour. I'm sure I wasn't the only one out there that found themselves veering off into the bush when you should have been cornering! It was seriously like running blind and the best method was to point the beam down out your feet to make sure that one didn't trip. It was exactly like they say when you are driving through fog, the brighter the light the less you see!

Half way back to the finish, Fabrice passed me running without a headlamp and I felt then that that was probably the best strategy out of all, his eyes had gradually adapted to the dark over the course of the race and he took off into the mist. He is a classy runner and hopefully he will contest some of the big events coming up. If he does, he is a real dark horse and one to watch.

From then on, I was really was finding it tough to see my way, but was happy to hold on to 3rd with a fast finishing Wayne right on my hammer. The bonus of the night was Tiff finishing strongly for 3rd place too. Kudos to Clarke for running with his wife tonight. Pizza and beer at Katoomba topped off a fun night out, but I'm just hanging out for a nice, clear sunny race day! Hopefully soon I will find some good form!
﻿

Thanks to Mick Donges I was able to dig up this graphic.

These are the same elevation charts except I have adjusted the x and y axis lengths according to length of run (x) and elevation (y).

I always go back to the colour coding of the gradients (ups and downs), that's what makes a run tough the way I see it.... 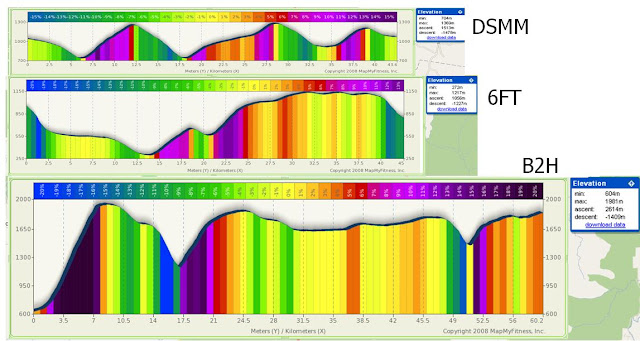 Posted by Brendan Davies at 8:36 AM

A big race like this deserves some decent preparation, and although I can't really say that I've been ticking all the boxes with my phycical preparation (terrible time of year for that!), I do at least have a bit of spare time to dedicate to the mental side of things.

I've been asking lots of questions from people that have done the race before, trying to get a feel for the race and the conditions. I've also had a really good look at the elevation charts and compared them to similar lengthed trail runs that I've done before.

This is the mapmyrun elevation profile of B2H

Compare this to the 43km Deep Space Mountain Marathon of 2010, my (previous) measure of all things painful (not including 100km+ races)

And it makes the 45km 6 Foot Track look like a real track race!

What I really like about the mapmyrun graphs are the coloured gradient scales. These are a much more accurate way of comparing the courses. Don't be fooled by the similar sized axis of the graphs either, take a closer look at the scales and you'll see why the gradient colour of the B2H literally go off the scale!

The first major climb in the B2H is The Staircase to the Summit of Mt Bogong, and this will no doubt be a massive test. It will suit the strong walkers in the field, and look out for guys like Damon Goerke to go well here. Damon literally walked away from me up Kedumba in TNF100 last year, and was able to put a significant enough gap between us to finish ahead of me, even though I started slightly ahead of him at the bottom!

The big decline taking runners down to Big River should be one of my strongest sections - I hope. I know my INOV-8 X-Talons will hold up well here too!

The next climb up Duane Spur is another 20+ gradient climb, although not as long as the first climb. After this climb the race elevation settles down a bit thankfully and its along here where the faster marathoners will come into their own.

One last viscious descent and a small ascent up to Mt Hotham and you are at the finish after 64km of running (and no doubt a fair bit of walking). The boys at Ultra168 have really talked up this race, and good on them for bringing exposure to the race for it. Personally, I think every runner on the day will be fighting their own personal battle on the day - it's going to be one of those races where just finishing will be the main goal!
Posted by Brendan Davies at 10:40 PM