The Australian Off Road Multisport Festival is held each year on the beautiful grounds of the Lake Crackenback Resort and Spa. This whole weekend event involves the Off Road Triathlon Championship on the Saturday, followed by stand alone MTB and Trail Running Races on the Sunday. I was down to 'defend my patch' at Lake Crackenback in the Trail Half Marathon. I had run on these trails many times in my role as Ambassador at the resort hosting the Trail Running retreats with Hanny Allston. I knew them well and there was certainly an element of 'no one beats me at my game on my turf', especially a triathlete ;-)

I was probably in the poorest shape fitness wise I have been in a long time. I have been trying to rest my body and not rack up massive mileage totals so early in the year. With my main goal race this year being Western States, the high mileage training doesn't really kick off until late March. So this race would be one thing, a good indication of where I'm at! I had also taken out a big group for an UP Coaching TNF100 Preparation Day the day before which included a 40km (albeit leisurely) training run! So I had a few excuses already messing with my mental prep for this one.

The title of 'Dirt Master' would be given to the male and female athlete who could complete the fastest combined long course triathlon on the Saturday, the 75km MTB on the Sunday AM and finish it off with the PM half marathon! Surely there wouldn't be anyone that could back up that well to blast around my 'home away from home' and beat me to the finish? Enter Ben Allen.

This guy is just a machine; an ex pro triathlete who now travels the world on the X-Terra World off road triathlon series, usually winning most of these. He monstered the triathlon on the Saturday, won the 75km MTB and no doubt wanted to head home with a clean sweep by taking out the trail half marathon too. I had my work cut out for me! I was introduced to Ben before the race and his partner Jacqui too. Just a lovely couple but I could see from the glint in his eye he was there to race.

The race started in the mid afternoon, at the hottest part of the day and it was blasting rays down. I was glad we were in a dry heat though. There is nothing worse than humidity! The trail was an interesting course, taking us along side the Thredbo River on the first lap and then out to The Diggings Camp Ground on the second lap. There were also some trails around the resort utlised. It could be best described as a flat, singletrack course that had a few surprises, namely a couple of river crossings across the Little Thredbo River!

Away we went and I was thankful to have most of the first lap to myself. I was feeling comfortable out in front until I hear the quick footsteps of someone behind me approaching the end section of the first lap. It was Ben and he was on a mission. The way he came up from nowhere was pretty impressive and in any other race I would have just moved to the side and let the faster man pass. But not today. These were my trails and I had some pride to defend!

We ran together for a bit and I was running on near full throttle but threw in a little extra that I had in reserve. Still Ben matched me and we went through the start/finish to start the second lap basically together. I had a real battle now. Starting the second lap, the little extra effort I had put in seemed to take it out of Ben and on the first couple of little lumps that we went up and over and I had stretched the elastic band a bit. This little breathing space was what I needed and I felt again like the race was in my control until that is if Ben surged again.

Along the Muzzlewood Track out to the Diggings, we ran along some twisty MTB track and it was flowing fun! I had managed to really break away from Ben by now and I could breath a sigh of relief knowing that I would take this one out on my home track! In the end, I'd managed to get 3 minutes in front of Ben, who obviously felt the effects of the big weekend in his legs. On fresh legs I would think the result may have been different!

The whole weekend looked like a really great event and I'm really pleased it was such a success with many triathletes, mountain bikers and trail runners combining and united together by the spirit of adventure. You just can't find a more stunning location than Lake Crackenback either!
Posted by Brendan Davies at 10:37 AM

Trail running is just a damn fun thing to do at any time and I was reminded on the weekend why I love racing on trails too! The Running Wild Wentworth Falls race is just a ripping little course and when you throw in puddles and rain I felt just like a pig in mud.

It's been a long time between good drenchings up here in the Blue Mountains and I was very happy to wake up to showers on race morning. On went the Inov-8 Roc Lites. In the dry, I'd wear the X -Talons on this course but the Roc Lites offer a little more surface area that I thought would come in handy on the slick boardwalks along the Charles Darwin Walk section.

The start was pretty quick with Robbie Neill dashing off and showing remarkable ability to stay on his feet in road shoes on the boardwalks. My fellow Woodfordian and smiling marshal Jo Brischetto, who has just started running again after a bit of a knee issue, pointed us up the single track and up to Chester Rd. It was not long after here on the way back down to the Falls that I noticed Robbie pulling over to the side. I asked if he was lost (oh the irony) and he said he was a little sore in the achilles and that his day was over. He gave me some good encouragement and I was on my way.

Down the National Pass we went...deep down into the valley, down slippery steep metal staircases. You had to have your wits about you on this stuff. The sheer cliff faces around here are breathtaking. Once at the bottom, we ran under the Falls and continued on the Pass to the Valley of the Waters which was unsurprisingly wet, but is one of the most visually stunning trails in the whole Blue Mountains. Not that we had time to stop and read, but there are signboards along the way describing how the pass came to being with hardy men from a different era literally chipping and picking a pass along the middle of a cliff face. There's some photos on the boards of them doing this. Not one rope, safety harness, crash hat, risk assessment filing cabinet let alone a jackhammer in sight! Just a lot of smiling, sweat drenched faces. Couldn't think of a better work office myself...I'd be smiling too if that was my job! 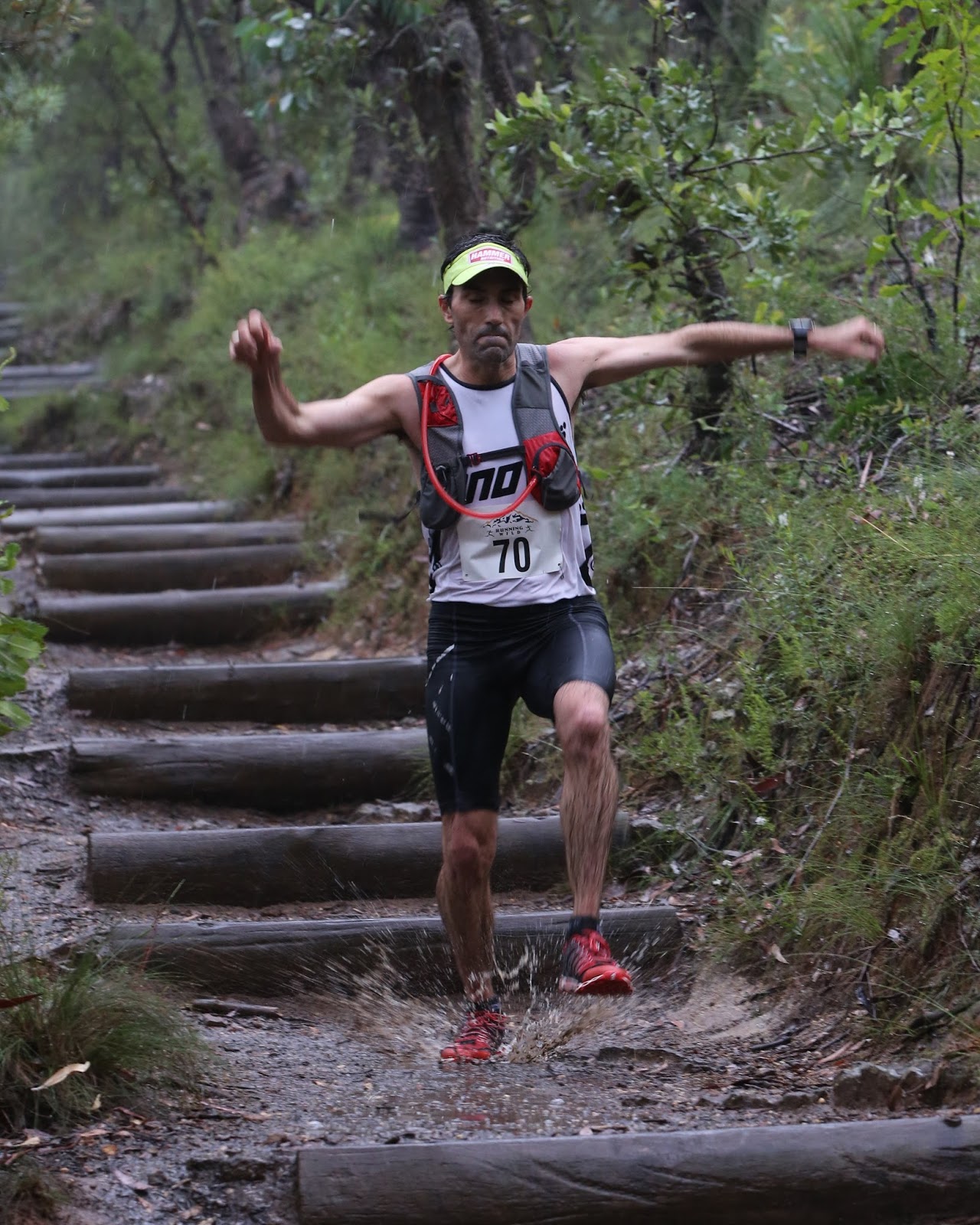 From there I skipped along the stepping stones and joined the Nature Track past Lillians Bridge. It was pouring now and streams were running down the trail. I was making sure I didn't slip and fall as there are some drops off the side that would definitely be your last one ever!

Back up many bush steps and on to the section of the Nature Track on way to Conservation Hut which may be the flattest trail in the Blue Mountains. I put the hammer down. I know how fast Wes and Ewan would be along there. Once past here I hit the Short Cut Track (no joke...that is the name of the track!) for the journey home. I love this bit...fast and flowing and lots of big steps you can leap and bound down. This is where the photo was taken! Oh yeah!

From there it was onto the Breakfast Point Lookout Track down to Undercliff Track, I admired a few big drop offs and I had a few minor slips here but thankfully none at the same time! The last section was back onto the Charles Darwin Walk and I took a second to take in the lovely Jamison Creek. Last year someone dumped a whole heap of chemicals into the local storm water which drains into the creek and killed all the yabbies and water life. But I'm glad the creek is now back to a healthy state and the critters have returned.

Coming back to the finish I was smiling with absolute kiddie joy for that had been a lot of fun! I high fived RD extraordinaire Ian Sargeant as I crossed the line and gave Jo a hug. She would have loved to have run that course too, it must have killed her on the inside to see everyone there but it won't be long before she is back. Anne Mackie handed me my prize; a showbag of drinks and other no nos that I've been working off from Christmas. Oh well, just another reason keep training hard!

Racing this course is just such a different beast to training on it. This course has it's fair share of tricky stuff; boardwalks (ice rinks in the wet!), stepping stones, metal stair cases going deep down and high up, yuck stairs, stunning waterfalls and the odd rock overhang ready to concuss the daydreamers. Doing all this at race pace in the rain, and well by the end my brain was much more fried than my legs! I was very happy to take the win and share the podium with training buddies and mates Wes and Ewan.

Thanks to RunningWild for once again giving us a place to meet up and play on! See you at Kedumba!
Posted by Brendan Davies at 11:03 AM