It seemed like a good idea at the time, they always do 6 mouths out. You think to your self a 10km run, 30km bike and 4km paddle doesn’t sound too bad I can manage that. I have some time up my sleeve to train, work on my weakness and build some strength and endurance. It never works out that way though in the end though and you nearly always go in under prepared.

It was in this light that I suggested to Bren a few months out that we should do the Kathmandu Adventure Series race in the Royal National Park, home court advantage and all that stuff, “it will be fun” I said. Just like that team “The Ninja Monkey Mafia Boys” was born and Dans always up for a physical challenge and teaming up with Phil they created team “Bundeena Boys”. Previous race winners had completed the race in 4hr 30mins with the field coming in at a little over 5hrs, we were in trouble before we started. This race took endurance, 5hrs of endurance and we were lacking. Determined to make a decent go of it, we trained as much as we could building our endurance and strength, because we were going to need it.

It is widely reported that we are currently in a nation wide drought, but someone had forgotten to tell June. In the month of June 07 leading up to the race we received over 314mm of rain fall (sorry outback), the wettest June on record and race day was no exception with 7.2mm falling on the day. This would make for a wet, wild and muddy race day. 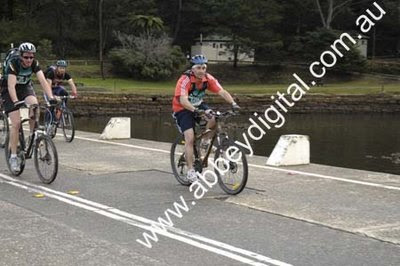 I was a little worried at first about finding the drop off location for the first mountain bike transition but there was no need to worry because as we rounded the first corner into the national park we saw a spectacle of cars parked on the left, parked on the right and parked where they obviously shouldn’t be parked. People running every which way, busily preparing, checking and double checking kit for the days challenges. Fluids, check. Compass, check. First aid kit, check, Clear contact? Check.

We untied our steeds (mountain bikes) from the tray of the Hilux and walked them over to the transition area. There was three long rows of racks standing there waiting to be filled with mountain bikes. So this is what +400 mountain bikes look like I thought to myself. We left behind some extra go juice (energy gels mixed with water) and the bike repair kit in order to lighten the backpack for the inimitable run up the hill, because there was only one way to get to this transition from the start line at the bottom of the hill and that was up.

The registration area and start line were based at the bottom of Audley hill, off to the left towards Greys Point. We parked on the road leading to the picnic area and made our way to the registration area in order to pickup our race kit. In the kit was a map (need that one), along with our race bibs and run sheet to tells use which check points to hit, in what order and where you are likely to find them. Under the picnic table in the clearing. Behind the sign. On the rocky outcrop.

It was no surprise to us given the amount of rain Sydney had leading up to the event that a section of the course had been cancelled. Shortening the mountain bike leg from 30kms down to 20kms taking out the section through temptation creek. Brendan and I sat in the Hilux trying to stay warm contacting our map so it would last the race, planning our attack and scheming but above all getting pumped up for the race to come. It wasn’t long into this that Dans turn up minus his team mate. Apparently Phil “the piker” had pulled out at midnight the night before because he was afraid he could make the distance J. Truth be told it was due to a hamstring injury. Looks like Dans was flying solo in a team event.

We did our finial prep, memorizing check point locations and the course map. The course was divided into five legs with three different groups doing them in different sequences to separate the field and give some breathing room. Final preps done we headed for the start line to mull around for the gun and get some last minute instruction from the race organisers. Looking around there was the usual line up for the toilet, people running every which way warming up but what was different here was the Kayaks that lined the river bank along with piles of paddles life jackets. Bang! Well actually it was a loud “Go” from the race organizer because the horn wouldn’t work due to the cold weather.

The race crowd surged forward and we were off, our first Adventure Series race underway. The crowd parted company at the base of the Honeymoon track heading for their different starting legs. For us it was the Honeymoon track to the mountain bike transition area and a vertical climb of about 130m with a quazillion stairs. “This is only the beginning of a long race, conserve those legs” was my mantra as I run up the stairs towards the transition area resisting the temptation to run after Dans and Brendan as they shot up the hill in front of me. “Mental note to self:” I thought “I really need to work on my hills”. Dans yield back as he raced off “Hey guys, I’m going to run off in front and adjust my brakes. I loosened them before the race so they would slow him down”, what the? Transitioning onto our steeds it was kamikaze time with a bullet ride straight down Audley hill and a Kamikaze ride it was. Dans decided to overtake the white Ford slowing him down and took it down the inside while Brendan and I did likewise taking the opportunity to over take on the inside of the right hand bend rounding Audley weir and the base of the hill.

From the bottom of the hill we rode out the 10km’s length of Lady Carrington Drive to the Waterfall end missing one check point along the way. Transitioning into our first run leg at the end of the trail it was a 5km loop around the Forest Island path, through beautiful rainforests, rivers and running waterfalls. You just had to watch out for the vine strategically crowing at the base of a fallen log across the track, tripping up many a runner including yours truly. Jumping back onto our steeds it was a 10km ride back to the start line and the Kayak leg. This was going to hurt. 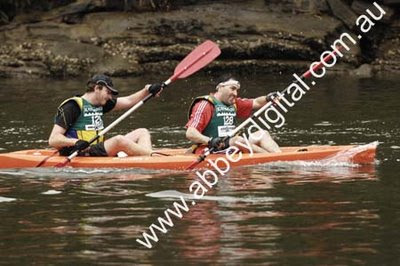 Brendan and I had planned to get some training in with sine kayaks in order to get some co-ordination worked out and some conditioning in but our best laid plans leading up to the event where foiled by the weather with the Colo River going into flood. So it was a blind jump that we got into the two man kayaks that we had just carried from the transition area for our 4km kayak. If your shoes were not wet at this point, the kayak leg was going to sort that out for you. We paddle the best we could through the pain shooting across our shoulders and lower back, a little back support in the kayaks would have been appreciated, but it was not to be. Like normal, I didn’t fit in and had my knees up around my head to keep me company. It was a physically tough paddle but we held our own reasonably well losing only one position during the paddle.

With the kayak leg over it was time for our second run leg out and around the Uloola track and another 130m vertical climb, but with legs twice the weight as last time. Taking a wrong turn at the top didn’t help things with about 15mins lost running out along the wrong track and back and deciding which way to take. Finally back on the right track the weather didn’t disappoint and started rain, rain cats and dogs. Rivers started to flow in the tracks we were running on and you where never to sure if you should run through the puddle in front not knowing how deep it was or at what angle your foot would land. Until now my knee had been holding up ok, but that was soon to change as it took a beating on the goat track going down the hill. After this point any running was done through pain and perseverance. 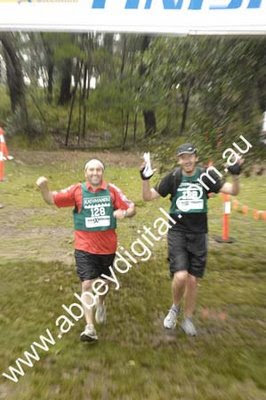 The final leg and what could be more appropriate then a romantic paddle for two. We jumped into our row boat made for two courtesy of the Audley boat shed and started the paddle up stream. At first we tried the one person paddling one person rest theory, but soon discover it was best done with both paddling. It took maybe the loss of 7 positions before we shelved the one person theory because at this stage we were happy for any rest we could get. We where about 4 hours into the race and feeling it, feeling every last bit off it. Gritting teeth we paddled paddled and paddled. Egged on from the shore by Dans “The Solo Man” who had finished way ahead of us. But Dans, being a team event you need two to finish and it appears the official thought so with the Bundeena Boys getting a big DNF (Did Not Finish) in the end.

“The Ninja Monkey Mafia Boys” made up of Brendan and Ian ended up coming in at 4hrs 35mins and 22sec coming 108th out of a field of 204 and placing 84th in our all male category. It turned out we had one of the better routes with Lady Carrington Drive during into a mud bath as the teams doing this leg last discovered. Getting covered from head to toe in mud, mud and more mud.
Posted by Brendan Davies at 8:58 PM