Two Fun Runs In One Morning! 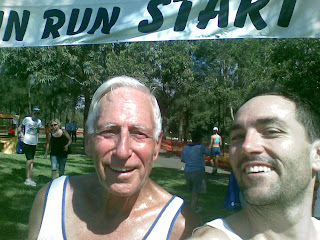 Well 6 weeks in Europe has left me pretty starved of races. Despite my best attempts, I couldn't find a race anywhere in any of the places we stayed at that particular time. You'd think there would be a race in Paris somewhere during the week leading up to New Years wouldn't you?? But no, seems the French are too busy smoking their cigars and drinking their fancy wine to organise races around this time of year! Mind you, I don't blame them...way too chilly to get up at 7 in the morning and go running (even though I managed plenty of training runs).

Germany was probably my best bet as it seems every second person is a runner over there. Seriously, runners everywhere and it was colder there than France! But no, the boss was in charge and there were no gaps in the itinerary for me to indulge my obsessions!

Well I bottled up my frustrations and let it all out this morning by doing the Menai Marketplace Fun Run (8.2km) which started at 9, then hurrying back along the M5 to make the Canterbury Fun Run (6km) which started at 10:15. The Menai Run was a tough course with lots of challenging little hills and I was happy with my result coming in 6th over the line (all the altitude training in Germany came in handy!) The Canterbury Run was a flat out and back course that followed the Cooks River. It was encouraging to see some fellow Woodstockians there. With me in the photo is Derek White, an octogenarian and still running strong! I ended up in 12th place.

A top morning and I'm glad to be back in Australia!
Posted by Brendan Davies at 10:59 AM