My journey started around 3 years ago when I decided to do something about the extra tyres that I was carrying around my waistline. Less than three years later I have gone from an ‘obese’ 85kg to an Australian representative. Sometimes I have to pinch myself!

Travelling over to England on the plane gave me an opportunity to reflect. I realised I am not what you would ever call an ‘elite’ runner. I am simply a good runner who has taken the opportunities when they have presented themselves through daring to step out of my comfort zone. With this opportunity, also came a certain level of responsibility. I was determined to do the very best I could. This meant that I trained smarter and harder, ate more sensibly, abstained longer and thought more closely about this race in preparation than I have ever done for any other race.

The race couldn’t have been run in better conditions, very cool and calm conditions, a slight drizzle coming after 3 hours that cooled us down and the route was the very scenic with enough twists and turns to keep it interesting. I was able to drive the whole course with my teammates and ran a part of it prior to race day, I felt very confident that I could achieve my goal time of 7:45.


The start was conservative; all competitors were taking it easy wanting to cruise up the hills at the start without exerting themselves. Once past the main inclines, the pace started to pick up with a Canadian bravely taking the lead, with the Aussies working together. The field stayed very close together all the way to 10km. At 10km, I checked my ‘Garmin’ and realised that I was already way ahead of my schedule. This worried me and forced me to make a decision, continue on with the pace (ranging from 4:05s to 4:30’s) or decrease and drop back through the field to 4:39/km pace. I chose to continue on with the current pace. At about 15km, Terrence and I made a pact, I threw the pre-race plans out the window and we were going to do our best to work together and stay together as long as we could.

Runners have a good sense of humour and always show good camaraderie. While running with the English boys at one point, I asked one of them what their qualifying time was to get in the team. His response was “7 and a half hours”. I said something along the lines of “pretty slow eh” to which Terence quipped in with “well that’s good that ours was 6 and a half then”! Of course, in reality, my PB was around 8 hours and Terrence’s was in the 7:40s! 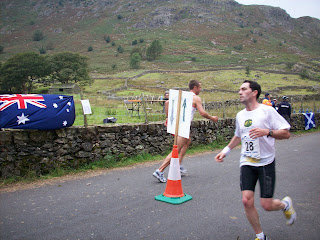 This out and back rolled and we passed the marathon distance in 2:58. On target for a sub 7 h 100Km!! Could this pace be sustained was the big question. Through 50km in 3:30 I was feeling quite fresh still so I lifted and caught back up to Terence who had inched forward 20 metres or so. The other Aussies were a little further back; Captain Tim was about 1.5km behind and Michael a further kilometre who was running with Jackie Fairweather, our brilliant female competitor. The Canadian rabbit had crashed and burnt, the leaders where now the strong English team but they were no more than 500-600m ahead and in fact were all taking turns at front running.

At around 60km, my pace started to drop and some quick maths told me a 7:15 to 7:30 finish was now the likely time. The crucial kilometres were to come when things can potentially go from great to tragic, but I resolved to dig in deep, and keep the form and ignore the pain and mental battle that was beginning to transpire. My pace and place (5th) remained more and less consistent between 60-80km. Great! However the business end was coming and I had a real battle on my hands.

The last out and back (80-85km) was indicating that the last 15km were going to hurt! I started feeling quite fatigued and was refluxing my Gus and Gatorade that I was taking on. My stride was shortening and the toe off was less powerful. My form was a bit wobbly which wasn’t great knowing that I still had some significant distance and hills to go. I was facing the wall, hadn’t quite hit it, but was looking right at it. My double marathon, 85km time was still very good, 6:20ish.

At 85km, the Scot who had been shadowing me for most of the race passed me and despite best efforts, I couldn’t go at his pace. Somewhere soon after fellow Woody Tim passed me. He was looking very strong and had obviously ran a pretty smart race to have that left in the tank. I struggled up the hills at around 92-95km and my pace now was blowing out to 5 minute kilometres and I was facing a battle to finish under 7:30. At around 96km, a kiwi runner, Martin Lukes, who had been struggling early on (but was one of the pre-race favourites), passed me. That caused me some annoyance and I forced my aching sweat soaked frame to dig and find whatever I had left to increase the pace down the hill to the town and finish strongly.

Stretching out over that last 400m would have been a sight! Once over the line I had to be caught by Ian Cornelius and Robert Boyce or I was going down! They plonked me on a seat and I just sat there for 20 minutes trying to suck in some oxygen and liquids. I’m sure I was very close to the limit! 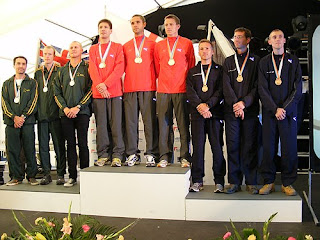 Overall, I had to be happy with the run, I gave it all I had, I ran a 36 minute PB of 7:31 and helped Australia to a team Silver medal!

As a recovery run the next day, I entered in a local Fell running race. I got lots of strange looks from locals when they recognised me from the 100km race the day before...”aren’t you the Australian that ran yesterday...”?? “Yes I am crazy” was my standard reply!

Finally, I am forever grateful for the amount of generous support offered to me from all at AURA and my fellow Australian teammates. I had a ball, and if I would love the opportunity to do it all again one day soon.

Posted by Brendan Davies at 9:47 PM