Travelled to Orange with the Woodstockers for the annual pilgrimage to the Orange Running Festival. I've always loved these country events and have found this particular event a great short, sharp hit out before the big race. A couple of years ago it used to be on a fortnight before 6 Foot and I always did the half marathon. The last two years it's been on the week before so have raced the 10K instead.

The good news is that I have finally cracked it for a Central West win! Seriously thought I was destined to never finish on top of the podium out there; I've been runner up at Orange in the half, the 10k, and runner up in the Bathurst half twice prior. But this finally ended yesterday.

Perhaps it was the lack of sleep the night before that was the secret. It was terrible; not only was I on high alert as we were staying in a less than secure caravan park on the wrong side of the tracks which happened to also be across the road from a hotel that was NEXT DOOR!! to a guns and ammo shop (town planning gone mad), but the cabin (no, not the cosy log type) had a big lean on it that made me feel like I'd downed half a bottle of bourbon as I walked across its floor. Conveniently too, the bed head was at the bottom of this 'slope'. Yes, sleeping was difficult!

The course had slightly changed this year due to flooding, so I'll claim a sneaky course record with an asterisk* Seriously though, the good news is that my time was about a minute quicker than the same race last year; and not because of the course change either. So, with a great hitout last week and now this, all signs are very positive for 6 Foot. I know I've done the miles, the hills, the long slogs and the junk. Now the icing which is the quick stuff is back too.

Now all we have to hope for is for the rain to go elsewhere for a while so the Cox can go down! On with tapering now...
﻿﻿﻿﻿﻿﻿ 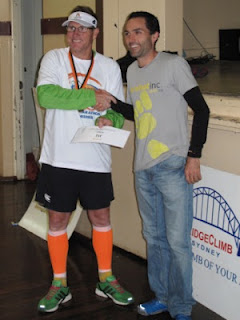 Posted by Brendan Davies at 9:52 PM