This has always been a favourite race of mine and although I was in no shape to run another marathon after last weekend's doozy, the lure of a warmer climate and a road trip with the Woodstock Runners was too hard to pass up.

The Woodies are well known for their road trips away and we had around 16 pile in on the bus Saturday morning. There were 4 in the marathon, most in the half and a few others in the 10k. The last time I ran the marathon up here I won, and that is still my only marathon win to date. That was in 2009. In 2010 and 2011 Uncle Dave owned the event and expected him up again to complete the trifecta. 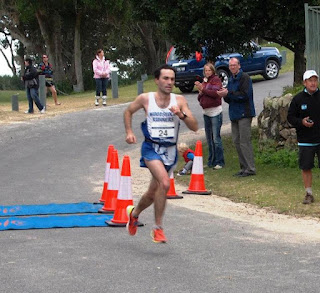 Race morning dawned and I made the short journey up from our wonderfully close house that we booked up to the start line. My aim was to enjoy the race and get through it with a smile if that was possible! I deliberately didn't want to run to a time or pace, but rather just to get in a groove and hopefully relax into the race. Lining up for the race, there were a few usual suspects; Bob Fickle doing his zillionth marathon, Jane Trumper, Michael McGrath, Ray James (Eagle) and Brick. Many Terrigal Trotters were there and I said g'day to Mick Miles, Darren and Charlie Brookes.

I could not see Uncle Dave so concluded that he finally left some scraps for the wannabees to pick up. I really love this course, despite it being my least favourite format of out and back (give me an A to B, then a looped course any day). It's very flat, only a couple of small hills that bite you on the way home and usually very fast. It's a very low key event, there were only 70 odd in the marathon, but the country hospitality and community spirit is massive and is what I love the most.


So the race was pretty uneventful. I didn't look at my watch at all except at half way (1:17:xx). I thought I was going alright, except I was hurting big time. Aerobically no problems, it was my legs and my pain level. Although not severe by any stretch, I don't like feeling that much pain in a marathon until late in the race. The fact that I was that early on just goes to show that racing two marathons in two weeks doesn't allow nearly enough time for the body to recover!

I resisted the urge to jump on the nearest horse and ride back into town. On the way back I ran past the same cows, sheep, farmers and cattle dogs I had said hello to on the way out. At least there was no lightning strikes keeping me company this year as it had in 2009. On the way back into town, I began to pass more and more of the half runners and this did give me something to focus on for a while. I felt terrible passing some of my Woodstock team mates that were doing the half. The day before I had challenged them all to keep ahead of me.

The last 5km were very slow and I felt very flat. I knew that this was not going to be a great time and in my head thought it was a 2:50 run, well at least it felt that way. Entering the finish line I spotted the clock at 2:40 and seconds and was amazed. For the way I was feeling from so early on in the race too, I was a happy man. My BIG goal for the next little while is to get my marathon under 2:30. This race was a great confidence builder and I really think that if I focus, train and taper for another race in a couple of months time properly I can shed 10 minutes off this time and achieve this aim.

The public holiday the next day gave all the Woodies the opportunity to let their hair down and the celebrations went on into the night. Rebecca, another Woodie, won the major lucky draw prize of a TV/DVD combo and is going to raffle it on her Mt Kilimanjaro fundraising night (for charity).

A great event, a throwback to the old days of racing and wonderfully organised by the Trial Bay Tri Club. This type of event brings the whole community together.
Posted by Brendan Davies at 9:03 PM