I have been on the hunt for a headlamp to use in the upcoming Great North Walk 100 miler (yes, it's a running event!), so I approached an old friend who has started his own distribution company in Australia, selling the Ferei, along with other, lighting products. I described to him the race conditions, the distance and the time period I would likely be running in the dark and waited for his recommendation.

I was supplied with the Ferei HL20 headlamp from Ferei Australia with the promise that it would be the 'brightest, toughest and most intelligent' headlamp available. I was sceptical but willing to try it and give it a thorough testing out on the course during my trail familiarisation training runs (sections 5 to 7). The time finally came last Friday night as I ventured out for the reccie with Clarke and Shona running the 5th section of GNW; Yarramalong to Somersby, and again last night running the last leg from Mooney Mooney Ck to Patonga with Shona.


The headlamp unit comes standard with the rechargeable 18650 Li-ion battery, the battery casing, the cable and the head torch all attached to heavy duty elastic fabric. Also included in the package is a 240V charger. As extra, I was also supplied with the BP4836 external battery pack and an extension lead. These two additions are not supplied as standard. Also available, but not available to test, is a smaller external battery-the BP28. 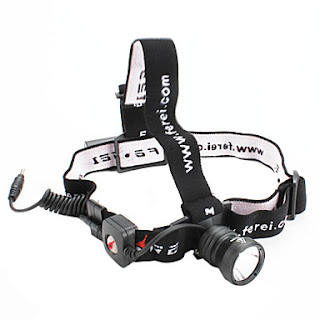 On the first run, I tested the unit using the headlamp with the extension lead running to the BP4836 battery. On last night's run, I used the standard 18650 battery setup. The former setup with the external battery will be used in the GNW. I stashed the battery pack, which weighs 240 grams into a side pocket of the UltrAspire Omega pack, where it fit perfectly. The lead ran up under the shoulder strap and attached to the rear of the headlamp unit. I removed the now redundant 18650 Li-ion battery but kept the (now empty) battery casing in place. While it is possible to remove the battery casing altogether if you were running solely with an external battery setup (by removing 2 small screws that attach the casing to the strap adjustment clip), I left the casing in place in order to access the backup power from the 18650 battery as may be the case during the race.

The obvious reason I went with the external BP4836 on the first run is the long light run time which I will need in the race. On its highest setting, the light time is up to 6 hours, which can in turn be extended by interchanging between the high setting while on technical trail and lowering it to the secondary setting on road and firetrail where bright lighting is not so crucial. There are two light settings on the unit, a high (100%) and as mentioned, a changeable secondary setting. A fantastic feature of this unit is the unique proprietary microcontroller. This basically allows for near infinite brightness adjustment for this secondary setting with a combination push of the control button. I set the second setting to around 50% which is more than ample for running on road, firetrail and less technical running. This should, along with the 18650 as a backup, easily get anyone through the 10 -12 hours or so hours of darkness in an ultra event like GNW. 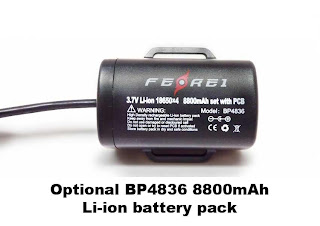 Other than high mode (100%) it is hard to give precise run times due to the variability of the secondary brightness setting. Roughly half full brightness will give at least double the runtime of high mode and the run time goes up exponentially with anything less than 50%. According to the distributor, on its lowest setting using the standard 18650 battery will give you 43 hours and using the biggest BP4836 on its lowest will give you hundreds of hours of run time.

Also worth noting is the smaller external battery which I didn't have available to test, the BP28. It's half the weight of the BP4836 at 120g but consequently delivers half the light time (up to 3h at 100%). This battery should be considered for ultra running, where you could have a couple of these instead of the bigger unit, picking up charged batteries at Checkpoints along the way. This would cut back on 120g of weight but for me I'd rather not muck around plugging in and out when there is already enough to worry about at Checkpoints and 120g isn’t ever going to break the back!

The light fits comfortably and securely on around the head and does not feel heavy at all, even when using the on-board 18650 battery on the second run. The battery casing fits nicely in the base of the skull area and the adjustable straps enable a stable and balanced fit. Even on the twisty and windy trails, the unit did not move around at all. Similarly on steep downhills, the battery casing only had very minimal bounce. Using the external battery, the extension lead did not interfere with my hydration setup and was unnoticeable while running.
To summarise the various weights:


This is where the HL20 comes into a league of its own. This unit delivers an unbelievable amount of light for such a small and lightweight unit. While on high, visibility on both dark, tree covered trail and in open air spaces was huge, the range illuminated at times was well beyond 200 metres. The beauty of this large output is that it 'floods' the entire area rather than giving a narrow, directional ‘tunnelled’ beam. I was confident looking at both my footstrike zone and the whole trail ahead just by moving the focus of my eyes. The long range gave me adequate time to pick and decide on running lines and make accurate predictions regarding obstacles and the direction the trail was heading. Particularly on the twisty and at times difficult to recognise rainforest sections of the GNW trail this is a big benefit as having an extra second or so decision making time could be the difference between making the right manoeuvre at speed or taking a cautious approach, or worse, taking a race ending fall.

On half power, the light was still more than powerful enough to give me confidence to run at full speed over rocky and sandy firetrail. With other weaker headlamps, and night time fatigue already kicking in, it’s very easy to get trapped into taking a slow and cautious approach. But with this powerful light radiating out it creates a sense of daytime running and there is no reason for runner energy output to lessen. These extra seconds that you get back from the light all add up to a lot of time over the course of a long ultra!

The product specifics state that on high it outputs 10 watts of power delivering over 600 lumens of light. I have little idea what this really means and obviously it's really difficult to describe in words what this looks like in reality. However, I can tell you that on the first run, Shona and Clarke were both using the same light setup of another well reputed brand and so I was able to compare. This is not a gear comparison, so I won't and can't compare all aspects of both, but from what I saw, the HL20 delivered far superior brightness and range. 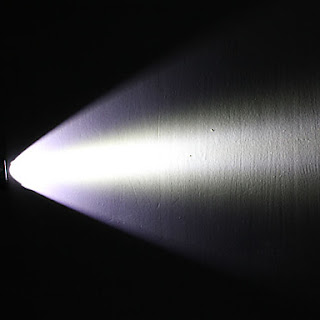 A standard, but nonetheless appreciated feature is the adjustable quality of the 30mm head unit; easily enabling changing the flood zone from more at the foot to 5 metre zone on technical trail to flooding a longer range of land on firetrail. Of greater note is the fact that the head unit is never really hot to the touch, even after hours on high. This is due to the aircraft grade aluminium body which not only resists impact but effectively dissipates heat.

Changing the light setting from high to secondary is one press of the control button. The button is great, but the fact that there is 'one button does all' means that on/off and changing between light settings and setting the secondary light setting and accessing the strobe "SOS" functions has to be done through this button with slightly different combinations of pressing and depressing over a small period of time. Functionally, while this would minimise malfunctions that could occur with multiple switches, it does mean that going from the secondary to high setting is not possible without going through the off mode. Again, not really an issue, as the half a second of darkness is never going to cause a problem, but something that could have been avoided by having an independent on/off switch. Also worth noting is the weatherproof nature of the unit, it did rain somewhat on the second run last night and a check of the website confirmed that I needn't be worried - it's weatherproof in accordance with IP65 standards.

On the first run, using the large external battery, I ran for over 3 hours with it on high most of the time and experienced no fading of light, but this was to be expected. On the second run, using the standard 18650 battery, I ran for 2:45 and also kept it on high the whole time and was surprised to find that it also lasted the whole run, although it did fade somewhat, particularly over the last 45 minutes of the run. It does feature a low voltage warning to let you know that you need to switch batteries.


With burn time of the high intensity LED light around 50 000 hours, this headlight presents great value for money compared to other units on the market. While the unit may not be the lightest around, nor the most 'running specific' headlamp, it more than makes up for it with the intense brightness that this light produces. Not once did I feel as though I was straining to see anything and the ‘flooding’ light saved me more than once from losing my head to low lying vines crossing the trail. The long range that this light can reach enabled me to spot trail markers more than 100 metres away, and not being familiar with this part of the GNW course, this helped enormously. This light allows for near daylight running conditions meaning greater confidence and more importantly no slow down due to poor visibility.

Come next Saturday night from Yarramalong to Patonga, this unit will definitely be gracing the top of my head taking me to hopefully a fast and safe victory! 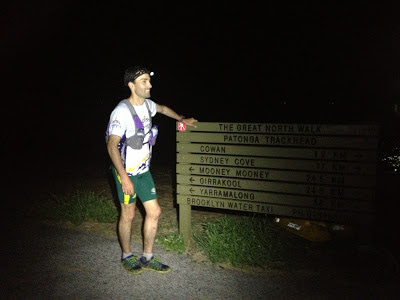 This from Joel from Ferei Australia!
Thanks for the great review Brendan. As a measure of our appreciation we are happy to offer a 20% discount to anyone who buys a Ferei headlamp as a result of reading this review. They just need to enter the phrase "RUNNERSCHOICE" into the discount coupon box when checking out and the discount will be applied.
Posted by Brendan Davies at 9:11 PM