This is a long overdue race report, UTMF had a bit of an impact on me and it's taken a little time to reflect on the race and all the business that went on around and following on from it.

First and foremost thank you to everyone for your incredibly nice words and support. It was a true privilege to be part of the event. The position I was so fortunate to be in was never once forgotten.

I'm going to have to keep this brief I'm afraid, so no blow by blow recount today. I just have to get out what I want to say and get my mind back on the job at hand being TNF100 this weekend. Although nowhere near as large scale as UTMF, in my heart and mind TNF100 is the one that means the most. It's in my backyard, on trails I regularly train on with people I love. It is the chance to race the best in Australia and to challenge myself to improve from previous battles.

UTMF - The Beauty.
The race was spectacular; running anti-clockwise around the spiritual significant volcanic monster. Running in the twilight just after race start (3pm) afforded me brilliant views of the colours and shades not often seen of Fuji-san. It was similarly menancingly beautiful in the crisp, clear morning air the next day. The course traveled through a variety of environments; pine forests, mountain ranges and even quite a bit of urban scape. There was much to see and experience.

The people. The Japanese culture is built around respect for each other and the environment and nowhere more was this on show than the actions of each competitor, volunteer, marshall, media and store holder at the expo. So polite, kind, charming and helpful.

UTMF - The Race.
I ran, walked, suffered and enjoyed every second of my 20h and 38 minutes on the course. It was the toughest thing I've ever done. The climbs sapped the life out of me and the long descents finished me off. Thankfully in between the 7 or so climbs in the race there was a fair bit of flat, undulating and, heck, even road running. The race suited an all rounder as it required the full range of skills. Fast flat speed, skilful technical running, hardcore tenacious climbing ability...It was hard!

UTMF - The Lessons Learned
The term 'Trail Running' for me has now been forever redefined. No longer will I imagine the sport being a running event on trails as the name implies! Of course it shouldn't just be that and I'll never take that for granted again.  The European men massacred me on the steep, technical, scrambly climbs and would power walk past me, gap me and pull further away. If there is one area of my training in the lead up to this event I would change it would be that I had actually trained to walk faster and with more purpose uphill! The positive to come out of it is that I now know and will at least take a different approach with me to Europe later in the year.

The other lesson I learnt from the race is that when the going gets tough, as it did on some of the crazy, long climbs and descents, the thing that gets you through it is mental toughness. So many times I was cursing and hurting so badly but the stubborn, dogged determination to keep going was greater. I used a variety of mantras, counting strategies, and mindfulness techniques to distract myself from the pain in my legs and my mind.

UTMF - The Highlights
Spreading my wings and meeting a slice of the International Trail Running Community. It was brilliant to put names to faces and run among some of the big names of the sport but also to experience and feel how each and every entrant are appreciated by the local Japanese people.

The other highlight was just the efficient and seamless organisation of the event. I can't begin to comprehend how difficult a job it would be to put on such an event and Tsuyoshi Kaburaki and his team have created a first class event. No stone unturned, nothing unthought of.

Examples...English translators at each checkpoint, drop bag ready to go at the checkpoint as my number had been radioed ahead of time, 'light' stations at certain checkpoints in case anyone had headlamp problems, used drop bag already at finish line for pick up when I had finished, live TV/Internet stream (so many of you have given feedback online of how good that was), extensive Twitter coverage on the ground (thank you Koichi Iwasa from dogsorcaravan), marshals at every significant junction. The list goes on.

The other highlight was of course hanging out with my wife Nadine, my friend and team mate Shona, her brother-in-law Glen and Abe and others from Descente (the licensees of Inov-8 in Japan). Glen, thank you for showing us both the charm and the underbelly of Japanese urban life and introducing us to the Robot Restaurant, the 1960s themed Pinball Alley at Nakano, the Meiji Shrine and the weird and wonderfully carefree Elvis impersonators at Shibuya! Shona, well what can I say? Such just reward for all the hard work she has put in over the last year and hearing you battle through the race and triumph was inspiring. Of course much love and gratitude to Nadine who did a wonderful job keeping me fed and watered and providing unconditional support.

Mt Fuji, I arrived curious but I left answered. Thank you. 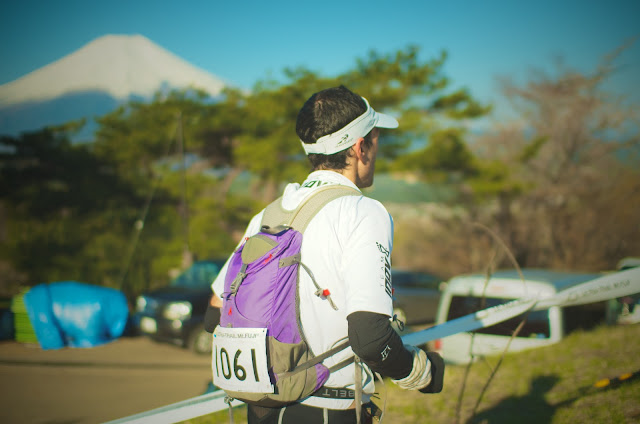 Posted by Brendan Davies at 3:20 PM