The FFFTM has a special place in the trail running part of my heart, and always will. It was the the first real trail event I entered in 2007 and it really sowed that lovely trail running seed that has continued to grow and blossom and is now such a big part of my life. Back in 2007 I was wide eyed and bushy tailed and full of anxiety about the mysterious sport of 'trail running'. 42.2km and 3h 24m later I finished, exhausted yet entirely overjoyed at the sensory experience that left me curious and eager to seek out new 'trail running' adventures. More than anything though, I remember the day as being incredibly friendly, no fuss and relaxed. I can vividly remember two things about the day; lounging around after the finish on the beautiful lawn with Nadine and some friends post race,and the burgers we all got to eat for free; food as a reward for finishing! I was in love.

Since 2007, I have been back twice. In 2008 I jagged a sneaky third behind two stars of the sport (and still are on their day); Tim Cochrane and Jo Blake. I remember talking to Jo after the race. I was a relatively new comer to the scene but I think he saw the enthusiasm and drive in me and he gave me a few training tips to take away. Fast forward to the following year and Jo and Tim would be my Australian team mates at the inaugural Commonwealth Championships. The following two years I pursued my road marathon goals; running for NSW both times at Melbourne which always seems to fall on the same weekend. The other year I ran this race was in a 2011; it was a wet, slippery affair. That year the field at the pointy end was super strong; Mick Donges, Andrew Tuckey, Tim Cochrane, Alex Matthews, Ian Gallagher and Ewan Horsburgh. Andrew and Mick smoked the field and I finished 4th.

This year I had no expectations from this race except to knock out a solid long run. I've had a relatively light last 3 weeks with only a couple of short races and I think I decided that this weekend would now mark the start of my GNW100M big km weeks again. FFFTM was just the long run I needed to end a good training week of 80 odd km and, most pleasingly than anything, a couple of good speed sessions which have been put off since Surf Coast Century. Like always, I would run to my best ability that the preparation allowed me to and whatever place that got, well that is always the unknown but always a the bonus if it's a pleasing one!
I only finalised my decision to enter the night before the race, and with race day entries allowed on the day I drove down and rocked up about 30 minutes before the start with my money and a smile. I said g'day to Max, the Race Director and he said I could enter but it was double the price! Of course he was joking but this really sums Max up. Just a friendly, relaxed guy. Although there's probably a thousand things he was thinking of he wasn't showing it one bit. The race HQ are on the property of Brad McGee, the former pro cyclist. He has an awesome place; the garden resplendent in gorgeous blossoming wisteria, dogwood and cherry blossom trees and there is even a few things there for the kids; a swimming pool, a sow with her half a dozen piglets and a friendly billy goat.

Anyway, I digress. Let's get to the run. The plan was to hit the first half of this course solidly; at a tempo pace without pushing the hills too hard early on. Although cool at the 8am at the start, the weather was warming up and I know the back end of this course is the business end and wanted to have running in my legs to kick me home. The event lives up to its name; it's entirely on wide fire trail from go to wo. The aid stations are pretty close together and I planned to have a drink at each one that were being manned by the friendly local bush fire brigades who would be receiving the bulk of the proceeds from this event.

I led the field out and didn't know how close anyone else was until the first little out and back in the course at the 21.7km mark. I thought Ian Gallagher and Paul Cuthbert would be close; other than those two I hadn't really had time in the morning to see who else had entered. Ian has been in smoking hot form of late, winning the Centennial Park 100k and then two weeks later winning the Glenbrook Marathon - breaking the course records in both events. A humble and fantastic athlete who will do great things in the years ahead. Paul, whom I coached to a terrific TNF100 and Sub 3 Canberra Marathon this year is also very much on the improve, recently finishing 2nd in the Canberra Centenary 100km event. I knew they would be hot on my heels and ready to pounce.

Indeed they were; as soon as I turned Ian came storming down a little descent and he couldn't have been more than 30s arrears. His cadence was cranking; he was in his road running rhythm and would have been going at least 5-10 strides a minute quicker. I knew if he kept that up I'd be passed in no time and then we would have a race on our hands. Paul came down soon after too and was looking very comfortable. With Ian's steam train like momentum halted at the U-turn, I decided then that I'd put in a big effort at least to the next out and back at around the 28km mark to try and snap the elastic. It was a bit of a make or break move very early in the race. If it worked and I managed to gap Ian and Paul it probably meant I 'd break their spirit a bit and things may be a little more comfortable for me. If I busted myself in the process and then Ian and Paul continued on the way they looked presently, I'd be pretty much resigned to losing to better men on the day. Things were interesting!

After the first turn around, the surge commenced, pushing strongly on the flat and slight ascending fire trail towards the next little out and back leg. It's a tricky grade; push too hard and you'll blow a valve, but letting the slope dictate your pace is also a sure way of letting minutes slip by. So the limit is a fine line but I found it and pushed on. The second out and back is not as long, probably only 1500m to the U-Turn and by the time I had turned there was no sign of Ian and Paul. I was slightly relieved that the gap had grown. When they finally came down the trail the gap was probably 800m. I did my best to put on a relaxed and easy rhythm but c'mon...who was I kidding Ian and Paul have been around long enough to know that trick! Inside I was hurting.

I downed my second Hammer Gel and things started to improve. The day was getting hotter and the grade a little more douche like but I pushed on. I always try to concentrate on my technique in times like this. I was wearing the new coloured Inov-8 Trail Roc 235s; I've been gradually trying to transition down to zero heel to toe differential in the last couple of months as this is the best way to develop a strong and durable technique in my opinion. I'm not quite there yet for the full 42.2km but I'm getting there. The trail was hard and dusty; it was very similar to road running and I was saying to myself constantly 'road legs'. There is subtle differences to how I run on the trail and the road, but when you get on a trail that behaves like a road, it can be a hard training your brain to tell your body to do things in an instinctively different way.

The last 5km are pretty tough but do bring some relief in the form of some short downhill sections to enable a bit of recovery. The big hill at 39km is no fun but that's trail running for you! I didn't know what time I was on for as I hadn't looked at my Suunto much all race, but I finished pretty strongly to sneak under 3 hours. At the finish I had a nostalgic moment and asked the marshall there for my little time ticket to take over to the recording desk as has been the custom in previous years. Alas, even technology has caught up with the sleeping corners of the Southern Highlands and they had electronic timing this year!

After the race I watched most of the other runners come home. Beth Cardelli once again showed her class to take out the women's race and her third FFFTM. There were many smiles on faces and it was clear that lots and lots had kicked goals in the race. There was friendly banter going on everywhere. Special mention to great mate and marathon tragic Jane Trumper, who, after thousands of marathons, had to succumb to a hamstring tear. It was her first marathon DNF in over 120! Get well soon Jane!

This event has a friendly and relaxed feel about it. It doesn't promise anything spectacular but delivers well above what you would expect. Thanks Max, his team of vollies, the McGees for giving trail runners a lovely little event and the firies for serving us drinks. 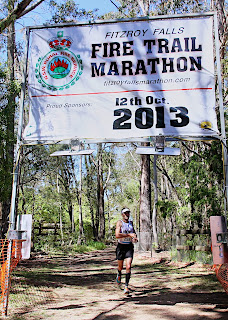 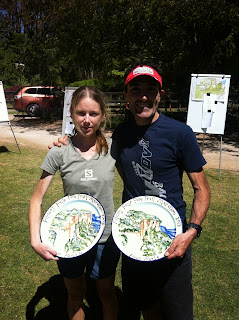 Posted by Brendan Davies at 8:46 PM