I have to get this one out and tell you all just how good this little event in the quaint little town of Carcoar is. It's a real gem.

If you were like me and had no idea where or what was at Carcoar, let me educate you. Thanks to a wee bit of wikipediaing on the way I feel almost expert enough to tell you about this sleepy little village tucked away off the beaten track in the Central West of NSW. It is a town steeped in history, once one of the biggest trading centres west of the Blue Mountains and later a notorious hang out of infamous bushrangers such as Ben Hall and his gang. Times have been rough on this charming little town; with the main rail route bypassing it in favour of the neighbouring Blayney, it became a bit of a backwater town that one would only stumble upon it by chance it seems.

﻿﻿In these modern times however, the town has continued to keep itself chugging with a 213 population figure and mainly due to the very things it has most over other towns around - history. Entering the main street of Carcoar on Sunday morning I thought I'd stumbled across the movie set of 'Deadwood', or maybe in the Australian context, say 'The Man From Snowy River'. The original 19th century churches, court house, public house and shops are standing proudly along side the people that work and live here. 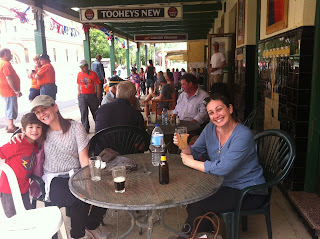 Everything about the running festival had really nice touches about it; from the 'enter now but pay later' registration system to the cracking of the stock whip starting signal. There was a kids race and a 'Creek to Carcoar' race too. So keen was he to have people involved the race organisers have made available a relay option and for the first time, and what drew me to the town, a 60km ultra.

While the fields weren't huge, the pointy end was stacked and why wouldn't they be? The race director Andrew has put a lot of incentives on the line for the top runners to come out give these races a good crack and while runners don't ever feel they race for prizes we all know there is no better way to bring out the best. Lining up in the marathon was current Australian Marathon Champion Alex Matthews and Aussie Reps Andrew Tuckey and Tim Cochrane. In the ladies, Aussie Rep Angela Bateup was going for a threepeat in the ladies race. In the 60k Ultra, there were Aussie Reps Ewan Horsburgh and Andy Hayden joining myself and then throw in ex Pro triathlete Sarah Fien in the womens field and it was ensured some cracking times were going to be run. The men's half marathon also featured gun road runner Harry Summers, who has represented Australia at the World Half Marathon Champs. So that's a pretty impressive list of names there across all the races!

Nadine and I stayed with Wes and Kellie Gibson the night before in their home in Bathurst, about 45mins from Carcoar. We left early in the morning and were blessed with a beautiful sunrise with pink and purple skies all the way to Carcoar. We registered and got into the final preparations. We were all running the ultra. The race wasn't originally on Wes and Kellie's hit list but had only entered after the cancellation of the Kanangra Classic. I was glad they still got to put utilise all the training had done for that event here. Unfortunately Kellie had cut her foot quite badly in the week leading up to Sunday and was really unsure whether she could race or not, so it was a massive effort for her to get to the start line. 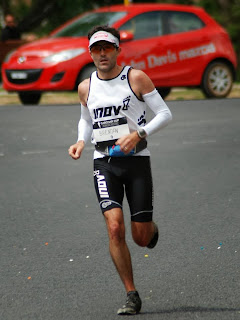 The Ultra field assembled at 7am. There weren't many of us altogether, and we were told the course by Race Director Andrew. It sounded like a great course that played to my strengths; undulating and a mixture of dirt road and bitumen. Once the whip was cracked, it was Wes, Ewan, Andy and myself leading the charge out of town. It was cool and cloudy and I think we dodged a bullet with the weather as this is the way it pretty much stayed all morning. Soon enough we were on dirt road and I took the initiative and picked the pace up. No one wanted to come for the ride so I was on my own with a couple of lead cyclists showing me the way.

﻿﻿The route took us along country dirt road, past farms and paddocks and through to the tiny town of Neville, which as the sign indicated, has a population of just 100. We ran a small loop around the small town and I was given a nice reception by the half marathon participants who were waiting to start their event (their route would take them back to Carcoar). Neville did have an interesting kids playground; a few pieces of equipment probably wouldn't pass muster these days but good to see a throwback to the old days.
﻿
Back out on the dirtroads and heading back to Carcoar, ultra runners were shown a left turn which would take them on an alternative loop to make up the 60k. Once back on the main course, I got to run with a few of the marathon runners who had started an hour later. I ran about 1km with my old No Roads Expeditions team mate Angela Bateup who was winning the ladies event and would go on to win her 3rd straight Cup. I pushed on again towards Neville.

﻿﻿The second time approaching town I caught sight sight of Tim Cochrane and Andrew Tuckey running out of town in the marathon. I thought it would be a close finish with Tucks so good at just lurking back and pouncing on you towards the end. It's good to see Tucks back in Australia again after a holiday in the UK.
The rest of the race was pretty uneventful; the Mt Macqurie Hill climb was fun and I caught the 3rd placed man in the marathon Nick. The last 4km are nearly all down hill and I decided with GNW100 only a week later that I wouldn't thrash my legs here as much I would have liked to. This bit probably cost me a sub 4hour finish but so be it. I was happy with the run. The pace was very consistent and I felt comfortable all race.

Post race, I enjoyed lunch and some bevereges with Nadine, Wes and Kellie and a few others at the beautiful pub and watched others come in. The presentations were in the old courthouse and I took home a beautiful piece of pottery by a local artisan which Nadine was very happy about! Thanks to barefootinc, who sponsored the ultra, Nadine also got to take home a new pair of F-Lites! I really hope this festival continues to grow as it's got some very special touches and deserves a larger number of runners to experience them.

I wore the new Inov-8 F-Lite 240s, the 6mm drop was perfect for the mixture of terrain on the course.
﻿

Posted by Brendan Davies at 2:31 PM