Oxfam Trailwalker 2014 - Teaming Up and Teaming down! 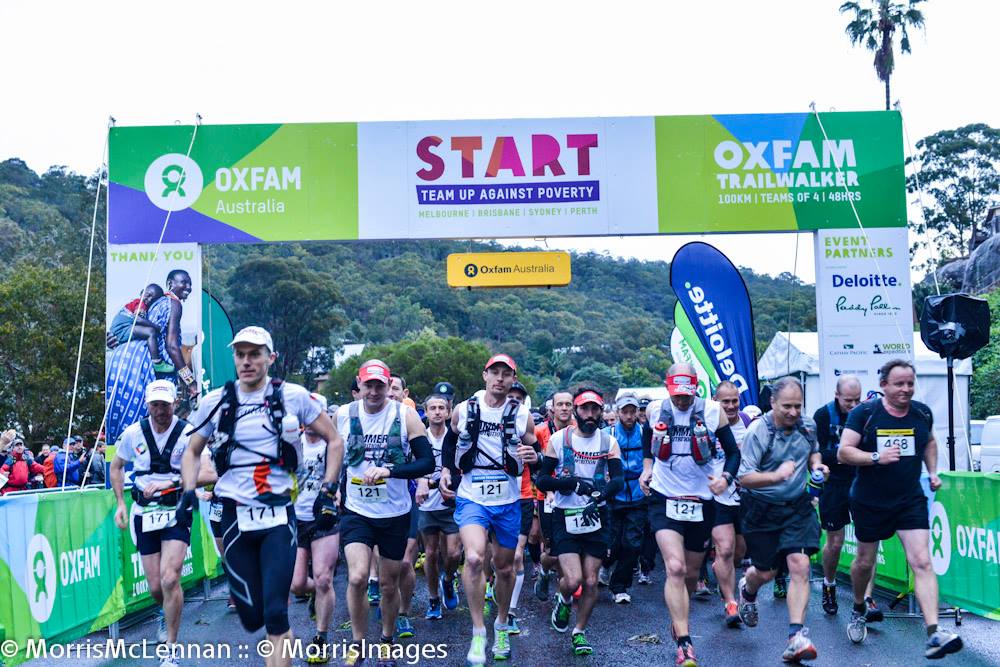 Whilst not being so much a race as it is a fundraising event, Oxfam Trailwalker is one of the only 4 person team trail running events in Sydney. I have previously taken part in another 4 man team event; twice before at the 96km Kokoda Challenge on the Gold Coast. I enjoyed the experience there immensely, running with your mates and doing what we love for a good cause is always a great way to spend a day.

I have previously blogged how Team Hammer Nutrition came about, Ben Blackshaw, Jono O'Laughlin and Paul Robertson were originally in their own teams, but due to team drop outs, amalgamated to start their own. I was a late call up but could not resist the opportunity to race with, and not against, these guys for a change! Through some great acts of generosity, we reached our fundraising target which sealed the deal on our fate. We were now well and truly committed.

With very limited preparation (reading the event booklet in the car on the way to the start) and with only a few snippets of advice about the course from a late Facebook panic callout, I somehow found myself at Brooklyn at 6:00am in the teaming rain meeting Ben for the first time and having a very rushed initial team bonding session. Our team training runs together consisted a grand total of 10 minutes and that was us going through the rego tent together. I had no idea what laid ahead, both in terms of the course or the group dynamic. In some pre race group emails (although Robbo hasn't caught up on the whole email thing as yet), we threw around the idea of a record breaking time. Somewhere around 11 to 11:30 hours was decided upon, going by the fastest split times on record. Bonkers.

Hammer Nutrition had come on board and we were in good hands for our nutrition at least. All the boys pretty much used it anyhow, so it was a great fit. Blue Mountains local, Nathan from Warrimoo Kitchens, had generously given up his day to be our crew. The weather was sketchy at best and it was a huge act of kindness for him to put up his hand for that job.

As seven o'clock approached I found myself at the startling line (not a typo) ready to go. Mentally, I can pretty much talk myself into believing I can run 100k off my base fitness these days. Physically though I knew I was pushing the boundaries. I had already put a lot of kms into my legs the week prior and was going to now 'race' with no taper and a 3h sleep. I was hoping for a nice, easy straight forward course. What I got what anything but.

This is now, for mine, the toughest 100k course I've done. If it wasn't for the extreme gradients in and total elevation of Buffalo Stampede, I'd say it would be up there with the toughest trail ultras I've done in Australia. The course is a bone cruncher. Pretty much from the 6km mark onwards all I could think about was "when is this damn single track going to end?" Please don't get me wrong. I love single track. Give me technical, tough, challenging single track trail over fire trail any day of the week. But after 4 hours of it the romance was well and truly over. My brain was hurting from the mental challenge and my legs were screaming from the constant lunging, jumping, hopping, pivoting and scrambling that this course demands. Was I still hanging on to an ideal? Were the sweet memories of the buttery fast, smooth and flat, pine needle soft Western States trail clouding my mind? In every aspect, this was no Western States, or indeed no TNF100. What this course lacks in elevation (although +3000m is nothing to sneeze at), it more than makes up for it in its challenging terrain under foot. 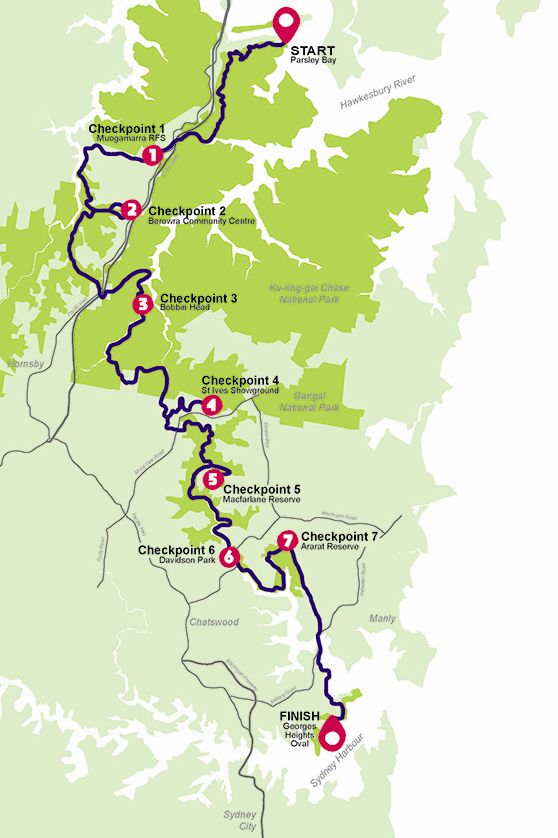 When you start deliberately running through puddles ankle deep and pausing for a couple of seconds half way across creek crossings just to get the anti inflammatory sensation from the cold water, you know it's a tough course on your feet. My feet and ankles were mashed, my quads and glutes pulverised. This is the type of course where good flow; kicking off rocks smoothly and landing jumps softly, could be the difference between a stress fracture or not. The weather was also playing its hand. The rain had made the rocks very slippery and the moss was deadly. It was a real day for the technicians.

And the course was beautiful. Stunningly beautiful in every way. Early on the views down to the Hawkesbury River and running next to Jerusalem Bay were breathtaking. Running adjacent Calna and Cockle Creek, was both equally challenging and energising. I saw brush turkeys (one drag raced me down a single track for about 200m), rock wallabies and lizards. The Davidson and Lindfield legs were also spectacular in the afternoon light as we meandered along the creek line. Even crossing the Spit Bridge and seeing middle harbour close up was stunning in its own ways.

And I learnt a lot about being in a team event. It's much much more than just managing your own race, you have a massive part to play in your team mates' runs too. Although Paul, Jono, Ben and I were very equal in ability, there were still times when we had to drop the pace as one of the team were going through a bad patch. There were also times when the pace was too slow and we all agreed to get a move on. We kept checking in each other and honesty here was key. We used a simple 0-10 RPE type scale. Yes testosterone and ego were sometimes a hinderance to honesty, but mostly it worked. Highest RPE would lead the team so that person could run at their own pace for however long they needed in order to recover. We worked through the issues that arose, we pulled together as a team and encouraged each other, not just when things were tough, but from the get go. We shared strategies that we all used when things were getting hard, we distracted each other by talking about mindless topics when things were a bit easier and we buckled down and hardly spoke at all when things were tough and there was a job to be done. We utilised the Checkpoints to regroup and restock, we never panicked and we were always within striking distance of our goal.

And in the end we nailed it. On that course, in those conditions, I don't think we could have done much faster. Our official finishing time was 11h 22m. Movescount had us at 10h 47m moving time (so 35min in CPs). So we have set a new benchmark for this course. Sure, individually someone could run this quicker. But getting 4 men across the line together in this time is another challenge altogether.

It would be remiss of me not to mention how great my team mates were on the day. I enjoyed every second of the journey with them. I went into the race not in the best headspace but came out reminded why I love this sport so much. The camaraderie, the challenge, the suffering and the deep satisfaction of a job well done was just the ticket I needed. Jono...thanks again for the conversation about the recuperative powers of beer and the lessons in how to row a boat, your wicked sense of humour kept the group entertained. Robbo, mate, you're as strong as an ox and being behind you for most of the day was a lesson in how to run technical trail. Although towards the end of the day, being behind you was the also the worst place to be....you can keep those shorts I gave you! Ben, it was awesome seeing you run. You were by far the 'man of the match' in my opinion, you looked mega strong from the get go and always had time for an encouraging chat. Look out GNW, I think you are going to give that a massive shake.

Lastly, a big thanks to Nathan Douglas for crewing for us. For someone who had never crewed before, by CP 3 you had it down pat. Seriously mate, you held the team together. Something as simple as buying a few litres of coke in advance is like scoring an A+ on a crew report card. If it hadn't been for you, it simply wouldn't have happened. Thanks also to Marcus Warner who came and offered support while on Ultra168 duties and all the wonderful Oxfam volunteers and supporters on the day.

Many people will be better off as a direct result of your generosity. All we did was run, but you all donated money to fight poverty and injustice around the world. As I sit writing this blog, I'm also well aware that there are teams still out there on the course, teaming up on their own fundraising journey. I wish you all strong and safe finishes too.