Latest post race post in history! Just been swamped with work which is both very exciting but it's leaving me quite time poor at the moment.

The Surf Coast Century course is just simply spectacular. This is definitely a case of a picture being worth a thousand words. Sit back and enjoy!


Well what about my race? Waking up to a gorgeous still morning and with a 'do or die' attitude; I decided it was the day to chase a time around the course record. Even though deep down I knew I was a long way off peak condition, I thought it may have been achievable, given a bit of luck.

From the get go, the pace was hot...Mick Donges and I basically ran the entire first two legs together, basically in the lead from the end of the first leg. Our split time to this point was exactly the same as Rowan Walker's course record run in 2012; 3h38min. So both Mick and I were right on track. 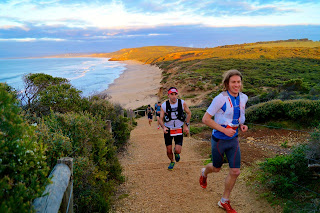 Around 60k Mick stopped to fill up on water from an on course water drop, I slowed to allow him to catch back up but he never returned. I found out later that he had unfortunately seized up and was undone by cramps. It was really a shock as I didn't see that coming at all. Up to then he seemed to be running really strong and if anyone was going to 'grenade themselves' I was sure it was going to be me first!

It was then I was on my own for the first time in the race and I was missing chatting and running with my buddy Mick. Not that we chatted much, I described it at the time as my longest tempo run ever!

By the 75km CP I had slipped 6 minutes back off Rowan's CR, but still had hopes of pulling that in over the last leg. I was dreaming. The mind was willing, the body wasn't up to it and I was hurting entering the last CP I think at 89km. I was told I had a big gap still on second, so mentally I think I switched off a bit and went into a survival type mode.

Well, survive I didn't. I 'grenaded' in the last 7km pretty badly, and hitting the soft sand beach run just sucked the little life I had left in me. I was also low on nutrition, and this was quickly turning very pear shaped. Thankfully there were a couple of generous runners who shared some nutrition with me. That was very welcome and shows the generous heart of trail runners! 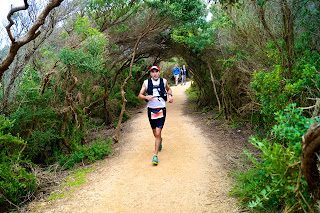 Exiting the beach run with around 3km to go, I was caught by Dave Eadie. Maybe it was meant to be or maybe it was just the way it goes in ultra running from time to time, but Dave and I crossed the line together to take equal line honours in just a smidge under 9hrs.

So again I'll come back next year to try again for the perfect SCC race! Try and keep me away...this is just a spectacularly beautiful Australian course, and an excellently run event, led by Sam Maffett and his team at Rapid Ascent.

I'm also looking forward to the trip to New Caledonia for the Trail des Cagous trail race, my share of the prize pool, which I couldn't be happier with.

Onwards now to the World 100k. 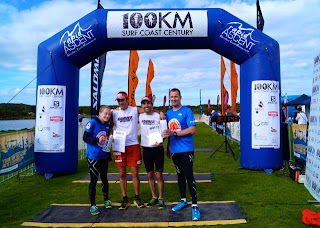