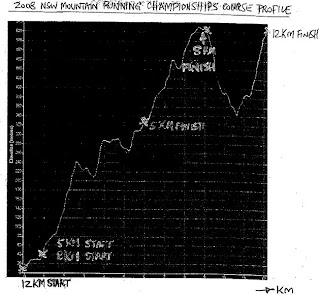 The vernacular 'doing a Bradbury' is a term most typical Australian sports lovers would understand. Much less would actually get to experience the phenomenon in the sporting field.

I headed down to Figtree for the mountain running champs. I love the bush...whether I'm hiking, running or biking through it, so this event was always on the cards. I knew it would be a hard run, 12km of almost vertical climbing with only a few brief reliefs. But after 6 foot track I was up for the challenge.

When I got there I was surprised to see how small the open men's field was. For a state championship event I was expecting over 50 or closer to 100 competitors. But only 9 men had made the trip down to Figtree today. That's a long way from the 800 or so the similar, yet longer, 6 foot track attracts.

So at 9:30 off we go in what had to be the slowest start to any race I have seen. Tony 'Fats' Fattorini and Stephen Brown go 'jogging' off up arguably the steepest street in Wollongong while I settle into 5th or 6th and the legs start burning like nothing else. I would have walked if it wasn't for the marshals and other competitors around. After all it did say mountain 'running' not mountain 'get yourself up to the top any bloody way you can' championships. Last weeks marathon was definitely still lingering in the legs.

So up this fire trail we go and it thankfully starts to level out and I get some rhythm going before we hit a road and up we go again. I knew we weren't meant to stay on this road long before we hook to the left and follow the track to Mount Burelli. Unfortunately not many other runners knew.

I knew something was awry when I asked a marshal working at the bordering motocross track if he had seen a mob of runners come through on this track. His answer was "Yeah, but only one or two". Hang on....the maths isn't right here?? So I continue on and I get a confirmation from some of the juniors and masters runners (that ran and finished earlier) that were coming down the trail, perhaps as a warm down, that I was on the right track. "Thank God for that", I said. On this part of the trail there was also some large stretches where you could see way ahead. I couldn't see my closest opponent which surprised me as I had picked up the pace and settled into a nice steady pace. I was sure I was getting closer to at least one or two of them.

As I passed the summit checkpoint which was also doubling as the finish line, I knew that there was only a long downhill and then back up the hill to go so I was expecting to see the runners ahead of me coming back up the mountain as I was running down. First I saw Stephen Brown, then Fats about 20 seconds later. Then no one. When I got to the turnaround point at the bottom it confirmed what I was already thinking, what the hell happened to all the other runners?

About half way back up the mountain there come the runners coming down, well three of them anyway. Seems they had taken a wrong turn into the motocross track and ran an extra km or two before they realised their mistake. One other runner, who was running a clear third at the time, later informed the group that he had inadvertently just kept running up Mt Kembla until he got to the top.

So while I pick up a bronze medal, I feel terrible for the other runners. It was probably a combination of not knowing the course area and not enough officialdom that caused their mistakes. I must say all the other runners were great about it...very accepting and they all genuinely congratulated me even though I knew I didn't deserve it. While I may have been able to pick up a place or two, there was no way I was going to get third if the runners all followed the route truly.

Oh well, I suppose this does justify the registration fee for NSW Athletics after all...and who would of thought that a runner from the tiny Woodstock stables would win an open athletics medal? You could have taken millions on that.
Posted by Brendan Davies at 11:19 AM