What a wonderful event AROC put on. This is a blue ribbon event, so well organised and thought out.

This was my debut trail ultra race, previously 6 Foot was it, but can now see why this trail ultra stuff is so damn addictive. There are just so many more chapters in the journey when the distance is longer!

I started next to mate, Andy Lee, who was pumped for a big run. I really had no idea how to pace myself for this run. I usually run to the terrain in trail events, utilising the downs when I can and grind up the hills, I didn't really know what was ahead of me when starting at the start line.

As soon as we set off it was clear Andy and the internationals where on a mission. Andy, Kilian and Ryan shot off and we reached the first single track in quick time. They increased their lead on the road section, so was really surprised when Killian passed me on the second single track section at Leura and Ryan at the Landslide. I guess they may have taken a wrong turn at some point? Along the Leura Falls section I made my first technical stuff up of the day, straining my achilles as I jumped down a shelf and misjudging my foot placement on a little rock. No real damage but I am definitely feeling it today still. 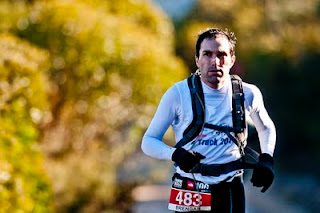 I ran very strongly to the Golden Stairs, that kind of trail is just to my liking. Was passed going up the Stairs by Francois, Grant and Damon (with whom I was to have a ding dong battle with all day). Buzz kept to his moniker and was lightning filling up my bottle at CP1, thanks mate! Took off along Narrowneck which is such a beautiful part of the course and quickly caught Damon and one other and got stuck into the job ahead, churning out some pretty quick ks. Going towards the ladder I was amazed at how gnarly the course was becoming; one trip or fall and it seriously could have been game over there!

Running along the firetrail after Medlow Gap was probably my favourite part of the course; I was on my own and got settled into a really good rhythm, doing most of my training on the road this was a welcome sight. Coming into CP2, I had no idea how far or how long I had been running, I had put my watch in my bag very early when a tree branch ripped the pin out of the garmin (mental note...put under long sleeve top of trail runs!), so wasn't sure if I had missed a CP or not. Little did I know that it is pretty hard to miss checkpoints. Mr G did an awesome job filling up my bottle here and after the gear check I was on my way with the words that Andy was only 1 minute ahead and the others 7 minutes or so. I was definitely thinking and feeling at this stage that I may just have a chance of good position if I kept the effort up.

Nutrition was crucial through here and I chowed down some energy bars, some GUs and heaps of Endura to wash it down. Going up the Tin Pot Hill was a real killer that I didn't need, but utilised this section to eat and drink so not to lose too much time. On top, I ran with Andy for a while and was shocked when I saw the leaders coming towards us...where they lost? No, this was an out and back section Andy told me. Going down the side of that hill was the steepest descending I have done without getting on my hands and knees or without rock climbing gear, but I loved it and really pushed ahead. Once off the single track, and onto the firetrail, I was starting to feel really low and walked a couple of sections I probably should have run. Here Damon and a French guy who was later to pull out passed me (even though we were all walking) and started to put a gap in on me. Thankfully by CP3 I had recovered enough to pass the French guy and was just behind Damon. I got to the CP and my wife Nadine helped me restock my energy supplied which I stuffed up my compression shorts and top which actually make very convenient storage! 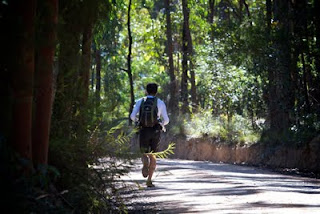 The run to Nellies was nothing spectacular but I grinded it out, the stairs up Nellies is just another beast altogether when going up them instead of down. My heart rate was racing, legs were wobbly and I left more than a little bit of my stomach on those steps a couple of times. I had to stop and settle the heart rate a couple of times, such was the intensity. When I finally got to the stop, I was encouraged to see and hear Blue Dog, Rod and a few others, they really perked me up. I didn't know if I was going to make it to the Aquatic Center but the welcoming surface of the road again was my saviour. Got into here and Nadine loaded me up with energy bars, bananas and I set off again. In my haste, I made a bit of a strategic error, forgetting to pick up my fleece and waterproof pants which we were told the night before at the bag check to bring with us from here. Thank goodness a very knowledgeable marshall at Cliff Rd let me know that if I could ring my wife she could meet me at the 3 sisters lookout with the gear. So I rang Nadine; she was on her way as I suddenly was very lifted by this good luck. I was thinking a time penalty may have been on my way. On the way I rang Nadine again who said I was to meet her at the Info Center. Unfortunately at Echo Point there are 2 info centres, and after another phone call and a short wait my gear arrived.

While this wait was not ideal, it was a real blessing in disguise as it gave me a good chance to get my breath back and recover and I took off down the Giant stairs and then the Federal Pass like a man possessed, my body felt great and I knew this section well having run it a month earlier with Beth C (so sorry you didn't race, you would have had a blinder!). I love the downhills and was just gunning it, it did cost me 4 black toenails but it was worth it, as soon after Leura creek I caught Damon. We ran together for a bit until we crossed Jamieson Ck. I was mentally gearing myself up to run all of the first part of Kedumba, to the turn past the Solitary turn off. However, it was not too be, and was back to walking a lot of the steep bits. The run up to the top, once past the left turn was nothing like that, it was mostly a walk, and this was the only real disappointing aspect of my run all day and probably cost me 5-10 minutes.

I was in and out of the last checkpoint, hardly stopping at all, and set off along the welcoming road. The last 5km were terrible as well, the steps were winning. Crossing a little creek at Leura I saw a wet footprint on a rock and knew that Damon couldn't have been too far ahead. As much as I tried, I just couldn't breach the gap. Running the last 2km is tough as and was very pleased to get to the finish line. 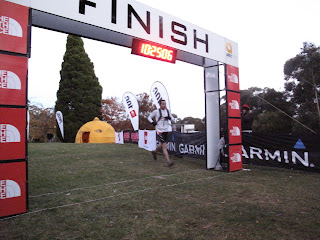 I really want to say well done to everyone who toed the line in this epic race. Special well done to Andy Lee to keep marching on when the going got tough and for taking it to the big boys early on. Also, Mick Donges, what a top shelf result and I fear there is much better to come. Everyone that ran through the night, you're all amazing.

There has been a little bit of debate about the internationals. I for one welcome them and wish they could come out more and more. It gives us Aussies something to aspire to and motivation to train harder for next year. Thanks again AROC for putting on a great event and the pink ribbons every 500m certainly made it easy for this very navigationally challenged runner!
Posted by Brendan Davies at 5:47 PM