The Kathmandu Adventure race series has always been a must do event since I first tried adventure racing 4 years ago. In my initial race, partnered with my brother-in-law, Ian, we finished mid pack but also with a longing to do it again and do it better!

Since then my partner in crime has been my good mate Lachlan Dansie; who holds the world record for most number of jobs anyone can hold down at once. Try this for a list; fireman, gym instructor, personal trainer, lecturer, sales assistant at Paddy Pallin (apparently he just works here ‘for the 10% discount’) and group exercise instructor at Nadine’s hospital. Makes me tired just thinking about it but somehow he juggles all this and still manages to compete quite successfully in running and fitness competitions!

Since partnering up, Locky and I have finished 3rd three times and 2nd once. It seems like we were never destined to get the top spot. Not that we haven’t been close. The nature of adventure racing means that one missed checkpoint, one navigational error or a flat tyre can ruin any chance. To this end, we’ve been there, often leading but only to be cruelly thwarted by some ridiculously unavoidable stuff up, or, admittedly a stuff up totally of our own doing!

This year, we once again went into the race confident and resolute that this was our year. Pre-race, we were surprised to see the course was very different to that of previous years, utilising sections of the Royal National Park that hadn’t been used in previous years. It was also longer than usual, which we were both pleased about.

For those that aren’t aware, adventure racing comprises of a number of elements across many legs. These elements may be trail running, canoeing, kayaking, mountain biking and rowing. Usually there are 1-3 legs of each, with the typical total distance being around 30-45km. On each leg, there are ‘checkpoints’ to find (a hole punch that you record on a card), which bring in an element of navigation and to some level orienteering as well. For those that know me, I frequently get lost on roads, so being out in the bush doesn’t make things easier! Counteracting this however, is the fact that Locky and I have both lived and trained around the park for many years and pretty much now every trail. Call it a home ground advantage!

Our first leg was a hard trail run of about 6km up over Audley hill. The rules of adventure racing state that both team members must stay together at all times. As this leg is my strength, Locky was working overtime to keep up, but we work as a team with me stopping to record the checkpoints, and Locky running ahead. This works well as I usually am able to catch back up by the next checkpoint. 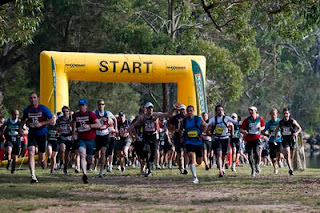 Our second leg is the rowing leg. If anyone has been down to Audley, you will know that the craft down there are more suited for ‘rowing gently down the stream’ than racing! Once in the boat, I take up my customary role – of navigator! Locky has the arms of the Terminator and so I leave the heavy hauling to him. Eventually even he needs a break and once we turned around at the checkpoint we take an oar each and row back to the boat shed. It seems to work well, and we get back still holding a comfortable lead.

Our next leg was a run up the Honeymooners Steps which are very tough but thankfully we had just come off a leg that we didn’t have to use our legs for so they felt reasonably fresh. Once up the top of this short but demanding ascent we hopped on our bikes for our first mountain biking leg of about 7km. While not particularly technical, the riding has its challenges, with the tracks being quite muddy. Once we reached the checkpoint, we dismounted and were again off on a run leg, this time down on the Ullula Falls track, which is a very narrow and overgrown single track. It is heavy going and we lost a bit of time finding one of the checkpoints, but we knew that we were still on track for a great time.

Fatigue starts to kick in on this leg and we chow down some GUs and water and eventually we again reach our bikes. We hop back on for a 12km ride back to the start finish. Reaching the last km of the leg, we were allowed to use the road to get back down to Audley; a very exhilarating ride! Once at the finish of this leg, we only had one more leg to go-the kayak. Again, Locky is the main contributor on this leg. My peewee matchstick arms offer no real forward motion, but I still dip the paddle in to make it look like I am doing my bit and to appease Locky who is barking orders and ‘encouragement’ from the back! Although we were leading our group, we didn’t know what our position was in comparison to the entire field, as there are 3 groups that all do the race in a different order. This is done to alleviate traffic on the course, so one doesn’t really know how they finish overall until after the race. 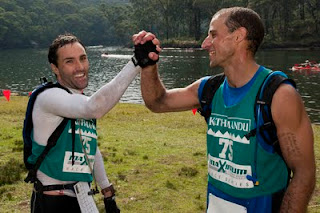 Thankfully, after 3 and a quarter hours, we crossed the finish line to learn that we were definitely the first to finish! Finally we had one the event we have been trying to do for four years. Talk about a feeling of relief and satisfaction! We celebrated by listening to Queen’s ‘We are the Champions’ on the car stereo while going back to Locky’s house to clean ourselves up before the presentations. At the presentations, we finally got to climb the podium to the top (the teams that finished 2nd and 3rd had gone home by this point!) where we received our $200 gift voucher. Woohoo!

I know fellow Woodies Tam and Tris Iseli and Phil Lobsey are keen adventure racers too. I really encourage anyone who wants to try something different to have a go. They really are very enjoyable!

Posted by Brendan Davies at 8:31 PM