I was listening to a song on 702 today and the lyric went 'Follow your dream wherever it takes you', terribly cliched and yes...I'm showing my age with my choice of station but that dreamed of place for me will be Chamonix in a couple of days! I feel extremely fortunate to be heading over to France in the next week. It's a big honour and a massive opportunity to be immersed in the spritual heart of European Trail Running and something I definitely won't be taking for granted!

I'm heading over for the Inov-8 athlete retreat; joining other Inov-8 supported athletes from the UK, Europe and the US where we have a beautiful chalet booked in town for a week of playing and product testing on the trails. Inov-8 have invested a lot in making a great clothing and pack range to join their already great range of trail shoes. I can't wait to try out the gear and give some feedback on how to make great gear even better!

I'll be soaking up the collective years and years of trail running experience in that chalet; listening and absorbing, as well as spruiking the beauty and greatness of the Australian trail running scene. I've already promised Sean Greenhill from Mountain Sports that I'll be bringing an international guest back over for the Glow Worm Marathon next year!

And of course there will be a little bit of racing too. It will kick off with the Vertical Challenge; a tangled mish mash of walking poles, lycra, heaving breathing and lactic acid. This will test my limits in a way that no other race has. It will make the Mystery Mountain Dash at the Glow Worm Weekend seem like a leisurely bush stroll. Intense would be the word for this one!

Then two days later I'll be lining up with the crem de le crem (sorry, couldn't resist) of trail running for the Marathon du Mont Blanc. Ian Coreless has written a fantastic preview of the race here.
http://iancorless.org/2013/06/25/mont-blanc-marathon-preview/ No need for me to describe the beauty of the course either; the French Alps are words that paint their own picture.

The race is going to be tough and the field is so incredibly deep but I wouldn't want it any other way. My biggest goal of the year was to test myself against the world's best and I think I've been able to do that a couple of times already and this will be undoubtably be the biggest stage I'll dance on this year. Although not my preferred terrain or distance, no race really ever is and I'll be going out to give it my best. The opportunity was there to do the 80km ultra, but chose to toe the line in the much more competitive marathon field instead and I'm glad I made that choice. It's not everyday you get to race the calibre of athletes on show and at the end of this year to say that I've gone up against the big fish in the big ponds, whatever my results may be, will be the most satisfying part.

I did draw the line at the Ice Trail Terentaise however! This event was originally on my radar but I've decided to give it a miss. Any event where crampons, walking poles and full down feathered fleeces are mandatory is just a little bit out of my comfort zone! The 65km event has an averaging finishing time of 15h, so that should give you some idea how difficult this run is. Instead, I'm going to be spending a relaxing week with Nadine in Budapest, a city which has fascinated Nadine for a long time and it will be a time to chill out and relax before heading back to Australia and back into the real world of working.

In preparation for this trip I've been spending lots of time in the Altitude Chamber at Valley Fitness Gym. Today I had my last hit out where Cam maxed out the chamber to simulate 5000+ altitude. It was hard work, and in reality we don't go above 3200m in the race, but I've always been a big believer and practiser of over compensatory training techniques.

My next blog will be from Chamonix! Au revoir! 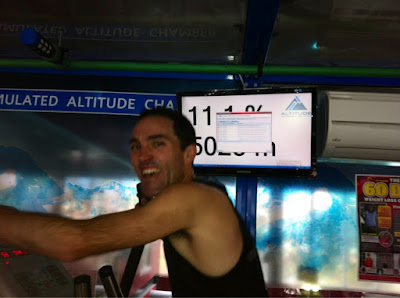