There is no better way to show off this beautiful race than the video below. It was simply stunning and I was really privileged to be part of the experience running with the some of the best European trail runners around. Would I do it again? Yes but much differently!

From a personal point of view, this race has so far been the most disappointing of the year and one that I will take many lessons away from. There is no doubt that running in the European Alps is so much different than anywhere else I have run. But this is the beauty of trail running and what makes our wonderful sport so unique.

The buzz at the start line, that you can see in the video, was electrifying. This was a big big event and nothing really in Australia comes close to comparing! I was keen to perform well for my sponsor, Inov-8. We were in town for a team retreat and this race was Inov-8's big introduction into the SkyRunning series. In the back of my mind though, I was feeling like I had not prepared mentally for this race. It was right at the end of a busy school term and my training was not always as consistent and specific as I would have liked.

As the French 10 - 1 countdown took place I looked around and took in the atmosphere. This was definitely the biggest thing I have been part of and perhaps will be part of and I wanted to remember every French second. Then we were off!

The start was very fast with the lead bunch of (insert sponsors name here) adorned athletes chatting calmly to each other as we ran through the main part of the town. I was loving the terrain here, flat and fast and so was really just relaxing into the race. It was surreal running shoulder to shoulder with Kilian among others. Before long we hit the foothills and the bunch pulled away. Their pace not dropping one bit! I settled back into the second bunch and worked my way through the first 10km with these guys.

I'm not going to give a blow by blow account of the race. It was a hurt fest and it gradually got worse and worse the longer it went on and the harder the climbs and trails became. I was happy with my position at the half way mark. I was probably still in the top 30 and descended the big mountain climb really well. But it got tough from there. My suffering basically became a bit too much to bare approaching the last checkpoint. My legs were cramping very badly, I had just been passed by the 4th female and was dropping places pretty badly.

At the last checkpoint, I had to take stock of the situation, assess my body and get physically well enough to do the last 7km to the finish. After a 25 minute sit down which involved lots of drinking, eating and considering, I was on my way again. The last last stretch was not pretty and involved a bit of walking. At about the 5h mark I crossed the finish line pretty wrecked but glad I'd pushed on. I was very happy for my Inov-8 team mates Alex, Florian, Oli, Shona and Anna who had all cracked the top 10.

If I could change anything about my time in Chamonix, it would be that I'd like to get there much earlier before the big race and prepare much more specifically for the physical and technical demands of the European trails. For me this year, that was impossible, with work commitments meaning I arrived in France only 3 days before the race. However, this was only part of the reason. The other was pretty poor race execution; I wasn't in the shape I had hoped to be in (rested and strong). Instead I felt flat and powerless, especially on the hills. I should have taken this into consideration and adjusted my own expectations.

I am very thankful that Nadine accompanied me on this trip and was there to greet me at the finish line. She was able to put things into perspective nicely and reminded me of the positives to come out of the race. The icing on the cake wasn't to be from the result of the race but without question it was one of the best week's of my life and an experience I'll take away forever. If I can build on this experience for another shot next year, I know I'll come to the start line much more ready. 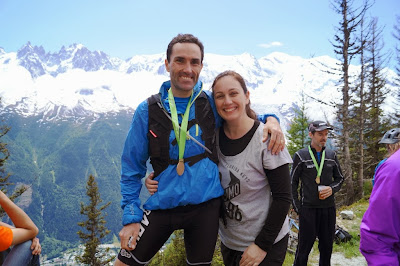 Posted by Brendan Davies at 9:27 PM