The Allure of the Western States Endurance Run

This article was written for, and originally appeared in the AURA UltraMag Magazine in late 2014

Some events attract their participants by the nature of the course. There are longer events and there are rugged and remote events, higher, steeper, crazier and zanier and there are definitely events with higher numbers of participants. These days there are also races with offerings of lucrative prize purses and all the bells and whistles that come with the new age of ultra trail running.

Then there is the Western States Endurance Run 100 miler. Period.

This race has all the history of a Wild West novel and the prestige of a Rolls Royce Silver Ghost. To me there is no other race that I’d rather be part of so you could imagine the joy of receiving my entry invitation on email after being excepted through the Ultra Trail World Tour. I still have that invite printed out and hung on my office pinboard. It was there to constantly remind me how rare those words on the paper were and that I could never, ever take that for granted.

There’s races I’ve been to that have all the hype and big promises only to fall short of the expectations. There’s also been races that promise nothing and over deliver. Then there’s WSER. You come, you experience, you walk away with the deep satisfaction that you’ve just added to the rich tapestry of the races history. Yes, you may be just a blip in the history, but to any self respecting ultra runner in the world, you’re a rockstar for a day. Oh, and hopefully you walk away with a belt buckle too!

So what is this history and prestige I talk about? Well it’s not every day you get to race in the oldest 100 miler in the world. The history is thicker than just that one statistic though. There is the trail itself which follows the historic Western States Trail, on which runners experience the majestic high country beauty of Emigrant Pass and the Granite Chief Wilderness, the crucible of the canyons of the California gold country, a memorable crossing of the ice-cold waters of the main stem of the Middle Fork of the American River, and, during the latter stages, the historic reddish-brown-colored trails that led gold-seeking prospectors and homesteading pilgrims alike to the welcoming arms of Auburn.

Or you can just hear the love of the trail in legendary trail runner and 5 time ‘States’ winner Tim Twietmeyer’s quote “I think the Western States Trail just makes a great balance between nature’s finest, and being tremendously historic. The last operating hydraulic mine is right next to the course between Last Chance to Foresthill. Running the trail is kind of like a history lesson—going back to the Indians, gold miners, silver miners, guys that founded California—and you realise how rugged and tough those guys were at the time. Plus, its really great singletrack.”

Over the years, there’s been many Aussies who have made the pilgrimage over to ‘States’. Yes, it’s even rumoured that after the Aussie assault in 2007 that these dedicated band of brother led to the change of the entry rules to avoid this occurring again! In the lead up to my race, I spoke to many of these guys and their words repeatedly expressed the same theme; respect the course, the race, the history. Train well, train smart and get to the start line in the best shape you can as you may only get one shot at this.

And with these words ringing in my ears, I got to the start line at Squaw Valley knowing that I’d done everything I could have done to be there at my best; mentally and physically I was in the zone and ready to pay homage to the race by giving it my all.

And that I did. I don’t wish to go into an extensive race report, as that can be viewed on my blog post: 2014 Race Report. But I got to Auburn just under 16hrs after that starting shotgun blast in 8th place but the happiest man in the world.

I want to thank the Australian ultra running community for all your support through all the messages and I know there were lots following the race online too. It was wonderfully uplifting and my only way to repay your goodwill is by strongly encouraging you to enter this race. Yes it may take you years to get pulled out of that lottery, and yes you may think you’re not ready to run milers or conversely you’re best years are behind you, but believe me when I say it, this is the race that every ultra runner just must do. 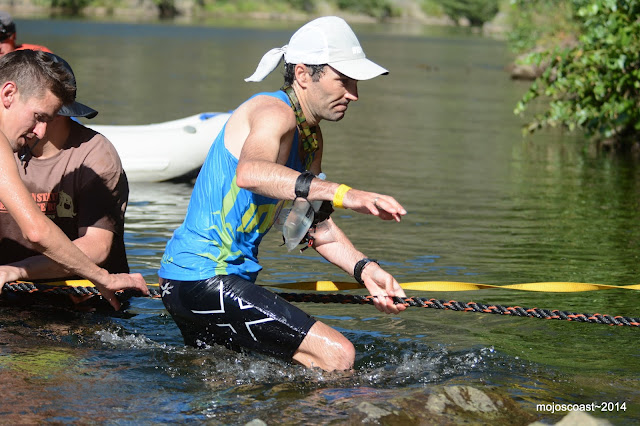