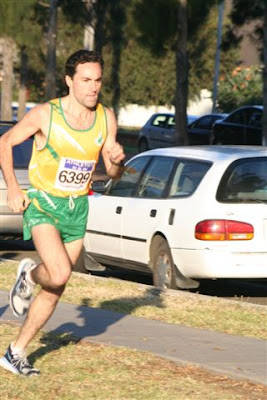 Life's starting to feel about like 'Groundhog Day' at the moment. Talk about getting the most out of life.


On Saturday I made my debut appearance for Bankstown Sports at the NSW Cross Country Championships at Miranda. As stated in an earlier post, I am not entirely happy that I was left with little choice but to change clubs for ANSW events. But on the positive side, all the Bankstown folk made me feel very welcome and I even received a nice photo in the email from one of the members!


As far as the race went, 4km (and I think it was much shorter than that) is definitely not my ideal distance! Way too short! I do think, however, that I did my best and held my own in the race. I was in the open males and just running with the elite of NSW was enjoyable in itself, even if they were flying past me at ridiculous pace.


On Sunday, I had planned two runs: the MS Fun Run at North Sydney (8km) and the Great NOSH (15km). It was always my intention to take the MS run hard and then lay off and coast around for the Great NOSH. After all, I did not want to pick up an injury or overdo it with the Macleay River Marathon next weekend.


Anyway, I ended up coming 4th in the MS run and first in my age group. This is my first major prize at a fun run. It was a tough little course too. Of course, I wouldn't be a runner if I wasn't entirely happy! I was holding on to 3rd for a section of the run, but lost 3rd place in the last 2 kilometres. Something to work on for next time I suppose.


What can I say about the Great NOSH? I think this is one of the best running courses I have ever done. I mean it does involve a little more than just running, with elements of rock climbing, bush bashing and mountain running constantly making it interesting and keeping the mind busy. I ran around with a fellow Woodstock lady and we had a great time just soaking in the atmosphere. I can't wait until next year. I will make sure I don't have a run before the race or a major run the following weekend and I will give this a real bash. I think I could do well on this course. I am a bit of a mountain goat on tight, rocky singletrack!
Posted by Brendan Davies at 11:04 PM