Macleay River Marathon - South West Rocks. On Saturday I travelled up with Eagle and PlodBod to South West Rocks to run in the Macleay River Marathon. This was the 27th running of the event, but for me it was number 1. It was the same for PlodBod but for Eagle it was a simple case of 'been there, done that'! The man is a living legend - he's up to 90 odd marathons and still pumping out sub 3:05s and on special occasions sub 3's.

After a very enjoyable trip up chatting to both my passengers about all things running and other matters we arrived there in time to meet up with a few other runners and head out for dinner together that Emjay had organised. Some more runners turned up and it was a very pleasant evening. I was trying to put up a calm exterior but on the inside the nerves were starting to hit already, I knew I hadn't prepared that well for the race as my longest run since the Canberra marathon was a 25km run at SMC about 3 weeks ago.

We got down to the start at about 6:30 and collected our race numbers and had a bit of a warm up. I said hello to a few folk that had made the trip north from Sydney as well. At 7 we were off and I set off at a comfortable pace with Silver fox heading out of the Trial Bay Gaol Caravan Park and down into the township. We were joined by a Port Tri Club runner. We had a brief introduction and chat and it was clear he meant business when he told us that his target was around 2:45. 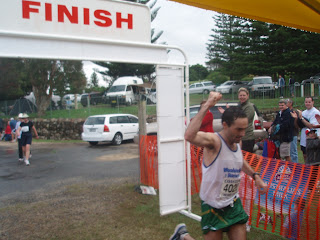 At about 3km I increased the pace a bit as I thought it was a tad tardy. Both silver fox and the 'Port' dropped back a bit. We were still heading out of town at this stage and I was just concentrating getting into a good rhythm and making sure the breathing was fine. The lead bicycle that led us out of town made way for a 4WD and before long we were on the long straight, flat roads that run parallel with the river. It felt great along this section. The wind was gentle and filling the lungs and the scenery was really good.

I went through 10km in 37:30 and thought this was a bit fast so backed right off but maintained the lead from 'Port'. 14km passed in 53:00 and soon after this marker is when the headwind hit and really made life a little difficult. It wasn't a strong headwind but it was enough to make it a tad uncomfortable. I was really looking forward to getting to the 21.1km turnaround point so I would have the wind at my back!

Unfortunately this was not to be and as soon as I turned around I suffered 2 blows; I was passed by 'Port' and the headwind that was now meant to be a tailwind disappeared! Nada, nothing, not a breath. Heading back in along the long roads I never let the leader get more than 20m ahead and I felt I was always in control of the situation maintaining that distance. My tactic was to stick to him and then at some point put in a big effort and see if he had the strength to respond. On the way back, I was able to see all the guys still heading to the turnaround. Silver fox was running 4th and looking good, Eagle had barely warmed up and Seris and Pete were cruising along very nicely together of course!

Heading back into town, the lack of long training runs was beginning to show and I never got around to putting in that last big effort. I could see 'Port' pulling away and all I could do to respond was to raise the effort slightly. I had my first GU hoping that the second wind would kick in but to be honest I was beginning to look back fearing that my pace had dropped enough for third place to make inroads. I was relieved to see no one in sight. 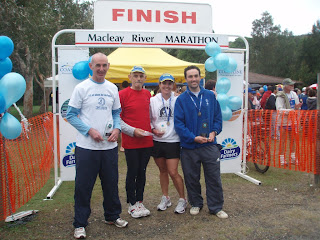 So heading back into Trial Bay Gaol, we had to run along a bike path that weaves in and around some bushland. I could not see the leader anymore but I decided that it was now or never and really dug deep for the last 5 km. It was a hard slog but I eventually got to the entrance of the van park to hear the race announcer call over the PA that the race leader was about 200m away. That really surprised me...that meant I was about 400m behind. I really sprinted the last section and finished in 2:47:36. which was a minute and 3 seconds behind the winner. I was ecstatic, surprised and buggered!

I got a lot of hugs and handshakes and pats on the back. I really appreciated every one's congratulations. The Coolrunning crew, the Woodstock crew and the Bankstown crew were all there. I was really pleased with my race. It was a PB and my first time under 4 minute kms for the marathon distance. Coming second was a huge bonus too.

Shortly after I watched Silver fox come in for a superb third place, arms raised and fists clenched! I was so pleased for him and knew that he would be a pleased man. At the presentations we both got a nice glass trophy that I'm sure has already taken pride of place in his pool room as I know it has in mine!

On the way back, Eagle and I chatted about some our races and how they panned out. Eagle had a real tussle for the age category win but gutsed it out and showed his class to win. He is a legend, but even legends can't convince me to run for 36 hours in the GNW100 miler (but I enjoyed listening to his tales!)

This was one fantastic weekend and I reckon that this event is just tops.
Posted by Brendan Davies at 12:59 PM