Three in a row!

Well it's three squash final victories in a row and this one was the sweetest of all!

The venue was Northmead. Our opponents were Northmead. Victors were US, Wenty Leagues! What a night it was, a true grand final in every aspect. 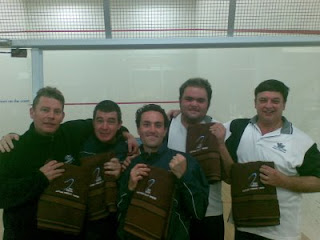 We knew this would be a tough match up. Although we had beaten our opponents in the regular season a couple of times, my recent poor form and their recent good form (including knocking off Hawkesbury in the semi) had us all worried. Before the game we had a good team chat about how we were going to slay these guys. My ankle, which I had rolled in the adventure race last weekend, was thankfully much better. We were all fit and healthy and ready to rumble!

I lost the toss and our opponents sent Number 1's on first. That's me and I was playing Peter, whom I was thrashed by in my last comp match 0-3. Due to the ankle being sore all week, I have been thinking about my game plan a bit, knowing that I may not have been able to run as much as I usually do. I think this extra bit of strategic thinking helped tonight. In the first game, I got my eye in nice and early and was hitting the ball quite nicely. My plan was to boast a lot more and these shots seemed to be taking Peter by surprise. Also, as my ankle was fine I was picking up a heap of his killer drops and boasts and putting them back into the back corners so he was working a lot more too. I like it when my opponents go and ask the ref after I have picked up a drop shot of theirs whether I really got it before it bounced twice too. It's a real confidence booster as I know my opponents are flustered and won't be playing too many of those shots again if I keep hitting winners off them! So I won the first game, but it was tight.

I think Peter took the first game a bit lightly after thrashing me the last time we matched up, so he really came out in the second and third games fired up. He began to find his rhythm and was forcing some unforced errors from me. He won the 2nd and 3rd games to 10 and 12 from memory which meant I was down 1-2 in a best of 5 and facing defeat. As the captain, going on first and having a first up win can give the team a huge boost. So I gathered my composure, and set myself the challenge to win the next two games and get the match.

The fourth game was make or break and I came out with purpose and composure. I was a lot more relaxed and as a result was hitting the ball with cleaner. Peter was beginning to show signs of fatigue and he was trying his damnest to get the match over with. At about 11-10 to me I jagged about 3 shots in a row with a couple of nicks and mis-hits and I had the game! The fifth game was a little anti-climatic. Peter was absolutely spent and I had just warmed up and I think he chucked the towel in once I got to 10-3. I ended up winning the game without losing to many more points.

So, up one rubber to nil, we were confident Paul, on number 3 who was on next, could do the business. It was a real close encounter from the outset. I forget the correct order of games won but it went down to the fifth and final game again right up to 14 all. Paul, true to his form all comp, called ‘short’ which means that the player who wins the next point wins the game, and in this case, the match. Unfortunately, he lost the point and suddenly the balance was even again 1 all with exactly the same number of games won.

Next on was Jean-Luc. He has been our most consistent player all competition and I was sure he could inflict some pain on his opponent. His opponent, Brett, is a crafty player. I found it difficult to play him in the round match ups and he has a couple of big weapons, notably his forehand drive. From the outset, Brett was using his experience and calling a lot of ‘lets’ when he probably wasn’t entitled to many of them. The referee, once they give some lenient ‘yes, let’ calls, then have in a way set a precedent for the rest of the match. So Brett continued to call a lot of ‘lets’ when maybe he could have made a greater effort to get to the ball. This is frustrating, but totally within the laws of the game. What it did do, however, was upset Jean-Luc and he lacked composure and focus all game. The result was a quite comprehensive 0-3 loss and suddenly our backs were up against the wall.

What we then needed to win the night, going into the final game, was a 3-0 victory. It would then comeback to a count back of points won. We quickly applied some maths and worked out a victory was good enough as we actually were only down by 2 points. This kind of situation suits Joe down to the tea. He relishes in the pressure and we all had faith that he could do the job.

And indeed he did! What a sight it was too. Since all the other finals had finished already, all the other teams came down to our court and watched the gripping game. Lots of people were cheering for Northmead and this only added pressure to them in my opinion. Joe showed his class and a very cool temperament. He had a job to do and he did it with style.

For the full results of the night, click here
Posted by Brendan Davies at 6:54 PM